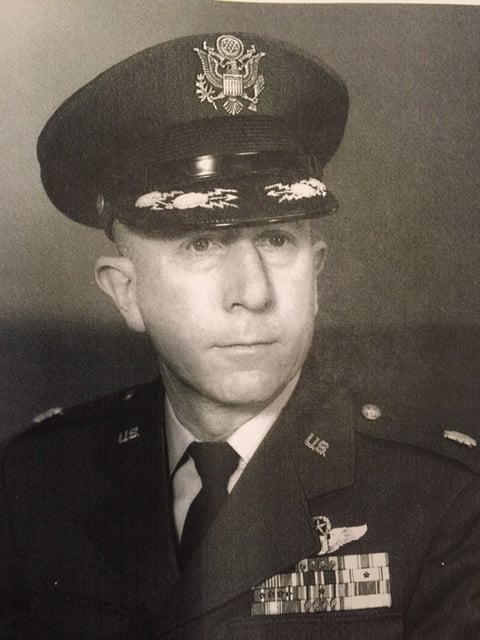 Col. William “Bill” Hale Casterline, 98, passed away on November 15, 2016. A resident of Williamsburg since 1964, he was predeceased by his beloved wife of over 51 years, Elsie Barry Smith Casterline, who was born in Belfast, Ireland. They met in Hilton Village in 1939 when Bill was stationed at Langley Field. From an early age Bill was focused on one profession only, that of flying. While at Langley, he and several other airmen bought a Piper Cub airplane and he learned to fly, making his first solo flight in 1939. In 1940 Bill was accepted to the Army Air Corps flight school and in May of 1941 he obtained his pilot wings and a 2nd Lieutenant commission. His first assignment was flying P-40’s while stationed in Puerto Rico. Days after the Pearl Harbor attack, his squadron was sent to Panama where he flew P-39’s guarding the Canal and then to the Galapagos Islands where he flew P-39’s guarding a base from which bombers flew long range patrols over the Pacific west of the Canal. In late 1944, he transferred to the European theatre flying P-47’s against German ground targets and he participated in the Battle of the Bulge and the Spring Offensive in 1945. After one mission he was forced to make a wheels-up belly landing. On another mission his plane was severely hit by flak just as he completed a dive bombing attack on four Panzer tanks, but he was able to return to his base. He received five Air Medals for his WWII missions. After WWII, he served in various command and training positions, and rose to the grade of Command Pilot. His final assignment was at Ellsworth AFB outside Rapid City, South Dakota, serving with the Strategic Air Command during the Cold War and Cuban Missile Crisis. He retired in 1963 as Base Commander. Following retirement from the Air Force, Bill and his family moved to Queens Lake in Williamsburg and he began a second career in aviation with the Army at Fort Eustis developing training programs for the Apache helicopter, retiring a second time in 1983. He was a graduate of the University of Nebraska (Omaha). He is survived by his son William H. Casterline, Jr. and his wife Maryann (Ryczak) Casterline, his daughter Margaret “Peggy” Casterline Bowen and her husband Charles Bowen, and four grandchildren, John Casterline and his wife Megan (Hyland) Casterline, Kathryn Casterline, David Casterline and James Bowen, and one great grandchild, John Casterline, Jr. A graveside service and interment at Cedar Grove Cemetery in Williamsburg will be at 11:0 a.m. on November 26, 2016. In lieu of flowers, the family requests donations to Williamsburg Regional Library Foundation, 7770 Croaker Road Williamsburg, VA 23188. http://www.wrl.org/give-wrl/wrl-foundation. Online condolences may be shared at bucktroutfuneralhome.net