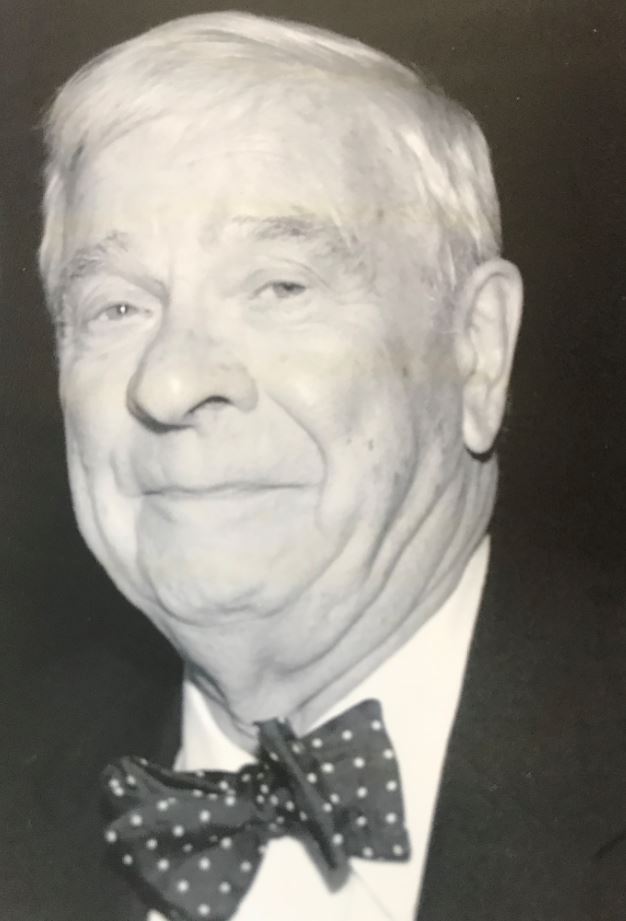 Warren Robert Kennedy died peacefully of natural causes at his home in Williamsburg, Virginia, on April 6, 2020, at the age of 96.

Warren (Jamie to his friends) was born on October 13, 1923, in Rockville Center, Long Island, as the second son of Harry Kennedy and Josephine Sherrer Kennedy. He grew up in Rockville Center where he attended the local public schools. At the outbreak of World War II, Warren joined the U.S. Army Air Corps where he achieved the rank of Sergeant, serving in the 9th Troop Carrier Command, 437th Troop Carrier Group, 84th Squadron. He was stationed in England, France, and Belgium for the duration of the war delivering troops and supplies via air to the combat areas of Europe.

At the conclusion of the war, Warren took advantage of the G I Bill and enrolled in the College of Business Administration of Syracuse University. He joined Phi Kappa Psi fraternity and completely engaged university life. It was at Syracuse University that he met the love of his life, Jane Eyerly, eldest daughter of Edward Grone Eyerly and Marion Schimpf Eyerly. Warren and Jane were married at The Church in the Highlands in White Plains, New York, on June 15, 1948.

After graduating from college in 1949, Warren was hired by the J.L. Hudson Department Store in downtown Detroit, Michigan, second in size only to Macy’s of Manhattan. It was in Detroit that Jill was born, the first of Warren and Jane’s three children. In 1951 Warren was hired as a buyer for E.W. Edward’s Department Store and the family returned to Syracuse. It was there that their second child, Scott was born. In 1955 Warren joined the J. C. Penney Company to become a buyer for Penney’s national chain of stores. The family moved to Garden City, New York, and Warren commuted to Penney’s New York City headquarters. In 1960 Jo Ann Kennedy was born, and the family was complete.

As the Penney Company expanded, Warren was sent further and further afield – Japan, Singapore, The Philippines, Italy, Spain, and Germany – in order to seek out quality clothing items for retail in the national chain. This experience instilled in him a love of other cultures that won him friends across the globe. The year 1965 was life-changing: Warren was made European Buying Manager for the Penney Company, and he and the entire family were transferred to London, England. Here he was free as never before to direct his own business affairs, to enjoy the rich life that London provided, to travel throughout the continent, and to engage the diversity of cultures that is Europe. At this time he discovered a love of skiing that led him to Kitzbuhel, Wengen, Saas-Fee, and Zermatt, where, for short periods, he would sail the mountains.

In 1970, with the ready availability of inexpensive goods from other countries, Warren reluctantly closed Penney’s European office, said good-bye to London, and brought the family back to the U.S. to settle in Old Greenwich, Connecticut. Again Warren commuted to Penney’s Manhattan office. However, the lure of London turned out to be stronger than anyone anticipated. When the opportunity arose to join a start-up corporation called Dimension Weld—which owned the manufacturing rights to a new fashion applique process—Warren left the Penney company and signed on as European Distribution Manager of the new Dimension Weld Corporation.

In 1972, the family again relocated to London and their second tenure turned out to be just as rewarding as the first—with one difference. During the first London venture the family had lived the entire time at Wellington Court overlooking Hyde Park; this time, their residence changed every year—Camden Hill Court, Astell Street, Albert Hall Mansions, Trevor Square. As a result they were able to experience several different neighborhoods of London, their shops, their pubs, and their local culture. In 1976, Warren again closed down a European office, returned to the U.S. and settled in Wilton, Connecticut. Here Warren and Jane resided until his retirement.

Soon after retiring, Warren and Jane moved to Norwich, Vermont—their favorite area of New England. They spent several happy years in Vermont, but ultimately settled in Williamsburg, Virginia, where Warren continued to enjoy many of his favorite activities including travelling, skiing, dining out, hosting friends from across the seas, playing golf, and collecting antique clocks. For many years, he volunteered at the local public library, and he always looked forward to serving as one of the marshals at the Kingsmill PGA golf championship.

Warren passed away peacefully at 9:45 in the morning, with his wife Jane at his side, and well looked after by his wonderful team of caregivers: Juanita, Pat, Shelley, Novia, Tiffany, and Nikki.

Warren will be cremated at the Bucktrout Funeral Home of Williamsburg, Virginia