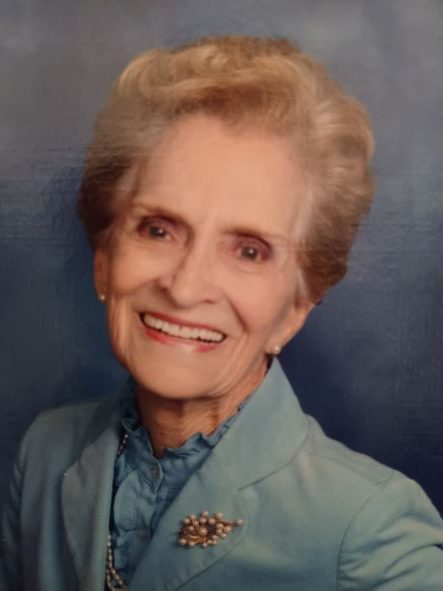 Venita (Bidez) Allen went peacefully to be with the Lord on October 16 at Riverside Hospital in Williamsburg, Virginia.  She was born January 31, 1926, in Copperhill, Tennessee, as one of five children, to Ernest and Agnes Bidez.  Growing up she was athletic, playing tennis and working as a lifeguard at the community pool.  She showed an interest in music at an early age and later earned a bachelor’s degree in voice at Limestone College in Gaffney, South Carolina.

After graduating, she was singing at a small gathering in Blue Ridge, Georgia, when she caught the eye of a young Army lieutenant, Joe Allen, who was home on leave from the Pacific Theater.  It was love at first sight. While he was fighting overseas, Venita recorded one of Joe’s favorite songs and mailed the record to him. They corresponded and dated through the end of the war, and were married August 20, 1947.  The Army sent them to Augusta, Georgia, when they decided they wanted to see the world.  So, Joe signed up for foreign language school in Monterrey, California. One of the highlights was at the Bing Crosby golf tournament, when Venita met Crosby and movie star Randolph Scott.  Next, they were sent to Munich, Germany. Venita continued her music career where she sang in an opera and at other events.  However, her career was paused for a time when she gave birth to their son Roger in 1952.  A few months later they were on an ocean liner, headed to the States and their next assignment at Fort Lee, Virginia.  When it was time for daughter Deborah to arrive, they traveled hours through a January snow storm in time for the delivery at Walter Reed hospital.  When they moved to Falls Church, Virginia, near the Pentagon, Venita frequently visited and sang to wounded soldiers at Walter Reed hospital.

Three years later, they traveled cross country by car and boarded a ship bound for Okinawa, Japan.  Venita worked at the Army base, providing logistical support.  On Sunday, she directed both the adult choir and children’s choir at a base church.  She also provided private voice lessons to aspiring young singers.  After nearly four years in Japan, Venita and the family relocated to back to Fort Lee. A year later in 1962, Joe retired from the Army, and they moved to McLean, Virginia.  Venita was active in the First Baptist Church, serving as children’s choir director and main soloist for the adult choir, weddings, and other events.  Later, they retired to Lake San Marcos, California, where she enjoyed perfect weather for playing golf and gardening. She was a devoted grandmother who dedicated much time to caring for mother and child after the birth of each of her grandchildren.  After Joe’s death in 2009, Venita moved to Williamsburg, Virginia, to be close to Deborah and her family.  She remained active in bridge groups, fitness activities, attending United Methodist Church, attending many of her grandchildren’s sporting events, graduations, and weddings.

A memorial service will be held at 1:30p.m. on Friday, October 22, at Williamsburg United Methodist Church, 500 Jamestown Road. In lieu of flowers, donations may be made to the American Heart Association or the American Lung Association.