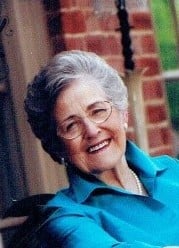 Ursula Murden, née Jahn, a 35-year resident of Williamsburg, passed away peacefully on Saturday, November 25, 2017 from renal failure.  She is survived by her children Bill Murden (and wife Judy) and Susanne Lendman (and husband Beau), her grandchildren Robert and Mariah Murden and Noah Lendman, brother-in-law Richard Murden and wife Lucy, and nieces and nephews.  Her husband Robert P. (“Bob”) and parents August and Else Jahn predeceased her.

Ursula was born in Kassel, Germany on December 16, 1928.  She met her future husband Bob in 1952 while he was stationed in Kassel with the U.S. Army.  They married in 1953 and she emigrated to America and became a naturalized citizen in 1955.  She lived in Gulfport, New Orleans, Milwaukee, and Williamsburg.

Family and service to the community were the core of Ursula’s life.  She was a dedicated volunteer in areas spanning education, faith, social issues, politics, reading, and health.  Her strong commitment to social justice was shaped by her childhood in war-torn Germany.   As a 16-year old, she was bombed out towards the end of the war and separated from her family.  She was homeless and hungry.  These experiences led to her advocacy on behalf of the underprivileged.  Her philosophy was “You help where it’s needed.” She served as the co-chair with her husband of the Historic Triangle Senior Center from 1999-2000, and co-chaired the Meals on Wheels and RIDES Programs in Williamsburg.  One of her earliest memories was her distress of seeing the 1933 Nazi book burning, which formed her lifelong love of books and support of literacy.  She served as the Chair of the Board of Trustees of the Williamsburg Regional Library for two years in the 1990s, laying the first stone for the second library in James City County.  As a child, she witnessed the horrors of Nazi dictatorship, and dedicated her life to democracy and world peace.  Her love of politics led to her involvement in political campaigns and community activism.  She served as President of the League of Women Voters from 1997-98.

Her volunteerism earned her the Women with a Cause award in 2009.  She was active in St. Stephen Lutheran Church, including in the World Hunger Program and as a Stephen Minister.