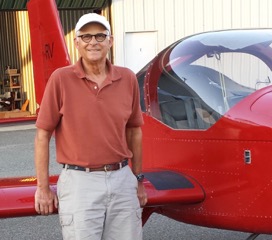 Thomas M. Mountjoy, 73, of Naples, FL and Williamsburg, VA died on February 10th after 5 years of treatment for metastatic prostate cancer. His experience made him an advocate for semi-annual PSA screening after age 60.

Tom’s childhood in Hanover, PA laid the foundation for a life well lived. As the son of Morris and Polly Mountjoy, respected members of that rural community, Tom formed lifetime friendships in school and sandlot ball fields. He learned the art of commitment to family and friends that enriched the lives of the many who mourn his passing. His childhood adventures instilled a creative spirit that Tom enjoyed through his life. Flying was his main passion, but sailing, scuba diving, cycling, and triathlons all kept him busy.

In his youth, family road trips to Louisville, KY instilled a love for travel that he indulged throughout his life. He toured New England while in high school, hitchhiked through Europe after college, and traveled the world with his wife, family and friends. He especially enjoyed sailing throughout the Caribbean and Mediterranean as his own captain with his family and friends as crew.

Tom went to Virginia Tech for college. As a Hokie, he was a member of Sigma Lambda social fraternity and Alpha Kappa Psi business fraternity. He continued his education at the University of Maryland where he earned an MBA.

While at VA Tech, Tom met the love of his life, Alice Milton, a student at Radford College. They married in 1968 and embarked on a wonderful adventure.

Tom’s first job with the VA Port Authority brought them to Norfolk. In 1972, he co-founded Cruise International to develop Norfolk as a cruise port. Over the years Cruise International was successful as the sales and marketing agent for several cruise ship lines operating out of East Coast ports. From this business grew CI Travel, eventually one of the 50 largest travel agencies in the country, and also Spirit Cruises, owning and operating 10 large dining/entertainment vessels in harbors nationwide. Spirit was the largest company in the industry and the first to reach coast to coast.

In 1986, Tom struck off on his own, forming a new company that owned and operated the Annabel Lee dinner vessel in Richmond, the Sea Rocket, a 150-passenger ocean-going sightseeing boat in Ocean City, MD, eco-tourism boats in Delaware, Maryland and Virginia and the VB Ducks. He was also recruited back to manage Spirit Marine concurrently with his entrepreneurial ventures, which ran all the marine operations of Spirit Cruises.  Tom’s farsighted venture into craft beer in the late 1980s with the 19th Street Brewery and Festhouse in Virginia Beach was an idea far ahead of its time.

Between his vocations and avocations, Tom was a very busy man, but he always had time for family and friends, especially family. He and Alice had three daughters and they enjoyed them at all their ages. Early mornings, the girls would sometimes cuddle up with their parents and Tom called this time “Daddy Heaven”. He was proud of all their accomplishments into adulthood.

Tom served on the boards of WHRO, Norfolk Sister Cities, Bay Diesel and Generator, and Cruise International. He was also a Big Brother.

In lieu of flowers, gifts may be made to WHRO at 5200 Hampton Blvd., Norfolk, VA 23508, Williamsburg Aviation Scholarship Program at 102 Marclay Road, Williamsburg, VA 23185, Prostate Cancer Foundation at www.pcf.org, or Virginia Tech Foundation at 902 Prices Fork Road, Blacksburg, VA 24601.  A celebration of Tom’s life will be held at the Williamsburg Community Building, 401 N. Boundary St., at 3pm on Sunday, February 26th.  Arrangements by Bucktrout Funeral Home.