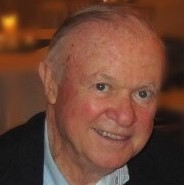 Thomas Leo Patrick Cook (82) of Williamsburg, VA, died peacefully on Christmas at his home.  Born on June 18, 1934 in Pittsburgh, PA, he was the son of Thomas and Helen (Cloonan) Cook. Tom graduated and was commissioned an Ensign in June 1957 from the U.S. Naval Academy and was married a week later to Judith Ann Funk, his loving and devoted wife for close to 60 years, who survives him.

Tom was winged as a Naval Aviator in March 1959. He loved his country and is a decorated veteran having served over 20 years in the United States Navy.  He completed multiple deployments away from his family and flew various missions in the F-8 Crusader including low level flights in support of the Cuban Missile Crisis as well as combat missions in the F-4 Phantom in support of the war efforts in Vietnam.  Tom was an accomplished test engineer and loyal employee of Ford Motor Company.  He was most proud of completing the Bondurant Racing School since it was as close to flying a fighter jet while testing cars.  Embracing a deep faith in God and service to others, Tom volunteered his time as a lector and Eucharistic minister at various parishes including Saint Bede Catholic Church, and he served as the Clerk of Northville (Michigan) Township.  Tom will be remembered for his friendly nature, good sense of humor, and gift for storytelling.

Of all his interests and accomplishments, Tom treasured his family most and was immensely proud of his children, Leslie Cook, Linda (Butch) Thompson, and Sean (Alicia) Cook, his grandchildren: Kelly (Greyson) Leftwich, Scott (Alex) Thompson, Brian (Samantha) Thompson, Amy Thompson, Thomas Cook and Grace Cook, and his great-grandchildren: Finley and Riley Leftwich and Luke Thompson.  Survivors also include his sister, Arlene Sapp, and several cousins.

Tom was preceded in death by his parents.

A funeral mass will be celebrated on Friday, December 30, 2016 at 12:30 at Saint Bede Catholic Church, 3686 Ironbound Road, Williamsburg, VA.  Visitation will be on Friday morning at Saint Bede from 11:00 am to 12:15  prior to the funeral mass. Inturment will be in the Saint Bede Columbarium at a later date.

In lieu of flowers, donations can be made to USNA Foundation. https://www.usna.com/sslpage.aspx?pid=228

Online Condolences may be shared at ww.bucktroutfuneralhome.net