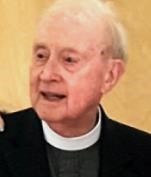 He was born in Baltimore, Maryland, on December 18, 1922, to Florence Nairne Bailey and Theodore Harbour Bailey, II.

Ted graduated from Catonsville High School in Maryland and earned his BA at the College of William and Mary. His college years were interrupted by World War II, when, as a pilot in the Army Air Corps, he flew a P-38 fighter-bomber in India, Burma, and China.

After completing his studies at William and Mary, Ted worked for several years as a Coca-Cola salesman in Pennsylvania, where he met Gunda Gabcke, a Fulbright exchange student at Dickinson College. They married in 1954 in Baltimore and spent most of the following year with various members of Gunda’s family in Germany, where Ted learned both German and how to play the violin.

On their return to the States, Ted earned his Master of Divinity at the Berkeley Divinity School (now part of Yale Divinity School) in Connecticut and was ordained in 1958. He served over 60 years as an Episcopal priest. In Maryland he served at St. Peter’s Church and Middleham Chapel (in Calvert County) and at St. John’s Church in Baltimore. In Virginia he was rector at St. John’s Church in Tappahannock from 1975 to 1988; during this time he earned his Doctor of Ministry at Union Theological Seminary in Richmond, Virginia. On retiring from full-time ministry and moving to Williamsburg, he served enthusiastically for nearly 20 years as an interim priest at a number of churches throughout the Diocese of Southern Virginia. And he continued to serve the Episcopal Church as a supply priest, taking services when needed and offering pastoral support, up to the year of his death. In recent years, Ted was most closely involved with St. George’s Church in Newport News and Bruton Parish Church in Williamsburg.

He was a lifelong reader of philosophy, poetry, theology, and the Bible—in both English and German. He deeply appreciated classical music. And he deeply missed his wife, Gunda, after she died in 2013. Since 2018, he had lived at Williamsburg Landing.

He is survived by his daughters, Brigitte and Christine Bailey, his granddaughter Wei Marley, his brother William Bailey, and his sister-in-law Jean Bailey. He was a loving father, husband, grandfather, and brother. His family honors his memory and misses him very much.

Reverend Bailey’s memorial service will be at Bruton Parish, when it becomes safe to gather and to celebrate his life.