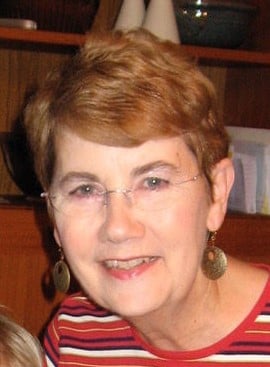 Sheila Ann Meyers, 77, loving and beloved wife, mother, and grandmother, passed away on November 17, 2020, after a long battle with Parkinson’s Disease.

Sheila was born on January 19, 1943 to John and Enid Bunker in Maidenhead, England, where the family had been relocated, because of the Blitz, from Upper Norwood, a south London Suburb.
When the war ended, the family returned to their home, where Sheila was soon joined by a brother, Ian. She graduated from an English public school, Croydon High School, one of the original Girls’ Day School Trust Schools.

Despite her academic success at CHS, a university education at the time was not open to her, and she chose to leverage her studies in French with secretarial training. She went to Paris, where she worked for Total Oil, working exclusively in French.

In Paris, in December 1962, she met her husband-to-be, Terry Meyers, when the two happened to take rooms in the same pension, at 63, Blvd. de Beauséjour. Though Terry was supposedly studying at the Sorbonne, as the spring went on, the two concentrated their time on the study of contemporary French culture through an immersion in cafés, sight-seeing, museums, and discos.

The two parted in June 1963, but soon realized how deeply in love they were. In 1964 Sheila came to New York City, and then to Washington DC, where she worked for the World Bank.

In 1965, after marrying Terry at the start of his junior year in college, Sheila moved to Appleton, Wisconsin. Houdini’s greatest escape is said to be when he left Appleton, and Sheila agreed, working for an insurance agency whose owner down the road headed up the John Birch Society. One of her co-workers complimented her on how well she spoke English for being a foreigner.

Pregnant with their daughter, Deborah, Sheila moved to Chicago in 1967, where she worked for the public relations office of the University of Chicago, helping to support the family through Terry’s graduate studies.

In 1970, the family moved to Williamsburg, where a son, Blake, was soon born. Sheila continued to work, as a secretary in the William and Mary Biology Dept., even as she began studying towards her BA, in French from the College, Class of 1978.

Finishing her degree, Sheila was licensed as a real estate agent, beginning at Murphy and McCardle, a career that led to local prominence both for her success in sales and for her leadership in the local Board of Realtors, where she held a number of posts. She received many awards for sales and for professional accomplishments both from the companies for which she worked and from her fellow Realtors.

Sheila was a 50- year member of St. Martin’s Episcopal Church, where she served on the Vestry and was active for a number of years in the Altar Guild.

She greatly enjoyed her involvement with the Christopher Wren Association in both the French and the Italian Tables.

Sheila was predeceased by a granddaughter, Lucy Boyle. She is survived by her father-in-law, Burt Meyers; by her husband; by her children and their spouses and children (Timothy Boyle and Maura, and Graziana Taramino and Camilla); by her brother Ian and sister-in-law, Sue, and their children, Claire and Matthew, and their families.

A service and interment of ashes at St. Martin’s will be held when circumstances allow. No flowers please. Memorial contributions, if wished, may be sent to St. Martin’s, 1333 Jamestown Road, Williamsburg 23185.