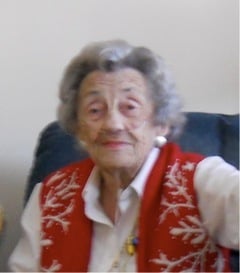 Of Williamsburg, died April 13 at Patriots Colony where she had lived since 2001. She was born in Angola, Indiana, on May 16, 1920, and grew up in Ohio. Her husband of 68 years, retired Air Force Col. Robert H. Wayland, Jr., preceded her in death in May 2011. The couple met at Bowling Green State University and married in Amarillo, Texas, shortly after Robert joined the Army Air Corps. They traveled extensively during his career with the US Air Force. Following Robert’s retirement in 1973, they lived in Satellite Beach, Florida, until relocating to Williamsburg in 2001. Col. and Mrs. Wayland were fortunate to have been very well cared for at the Berkley, at Patriots Colony, where they moved in May of 2009. In Mrs. Wayland’s last month the skilled and compassionate staff of the Patriots Colony Convalescent Center lovingly attended to her.

She is survived by her brother Thomas Prosser of Mesa, Arizona, her son Robert and daughter-in-law Susan, of White Stone, Virginia, and son Scott, daughter-in-law Beth, and granddaughter Victoria of Princeton, New Jersey.

She will be ilaid to rest at Arlington National Cemetery with her devoted husband.