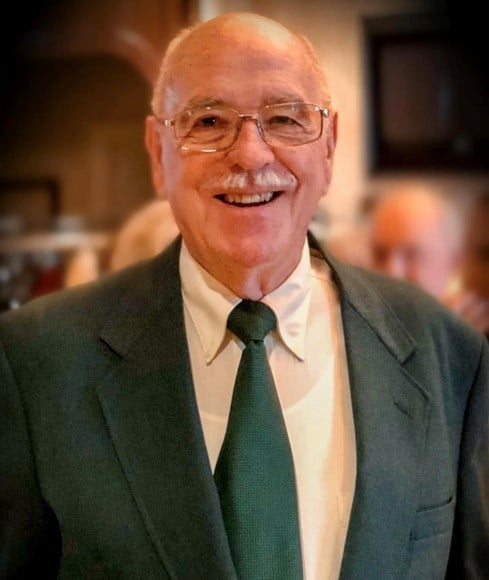 Ronald “Ron” Edward Rothwell peacefully passed away on July 3, 2022 at the age of 85, at his home in Williamsburg, VA surrounded by his family and loving wife of 65 years. Ron was known to be a true gentleman, so selfless, caring, and full of wisdom.
The second child of three, Ron was born to Albert and Josephine in Bolton, England. He came to love the art of music and preforming, singing and miming all over England, alongside his older brother Brian. The two were known as “The Rothwell Brothers.” In 1955, the Rothwell Brothers won a local talent competition. Presenting the prize was the pageant winner of Beauty of Belfast, Ireland, Margaret. Ron walked to center stage to receive their award, when the local newspaper captured the first time he and Margaret ever laid eyes on each other.
The two married in 1957 and had their first two children, David and Sandra in the five years thereafter. In 1963, the family of four immigrated to the United States to fulfill their dreams. Three years later, they became a family of five with the birth of their daughter Sharon. Ron flourished in the States. He worked as an engineer at Allied Chemical Inc., helping develop one of the strongest fibers of their time. After a long and successful career with Allied, Ron retired early, allowing him and Margaret to grow their family business and popular tourist attraction of 31 years, The Williamsburg Doll Factory.
Ron enjoyed traveling the world with Margaret. Traveling from the United States to New Zealand, and everywhere in between, Ron was always behind the video camera documenting his travel and family milestones along the way. Ron was known for his powerful voice, performing anywhere from nightclubs across New York City, to neighborhood dances. Whether he was telling someone a story or singing Frank Sinatra, he never missed a beat.
Ron is survived by his beautiful wife, Margaret; their children, David [Carolyn], Sandra, and Sharon; grandchildren, Lauren [Samuel], Ryan, Meagan, Ronnie, and Lindsey; great grandchild, Daniel; and his brother, Brian. Ron was predeceased by his parents, Albert and Josephine; and his sister Patricia.
He will be missed greatly by those who came to know and love him. At the request of Ron and his loved ones, there will be no formal service. The family will be announcing an upcoming celebration of life for friends and family to honor him and his legacy.