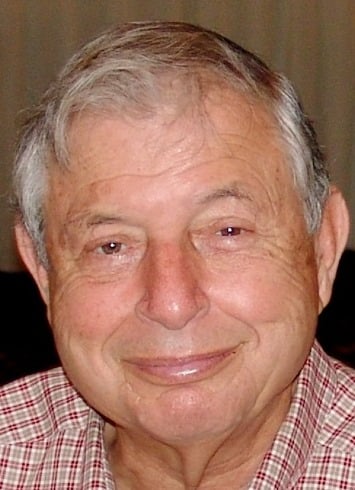 Rollin Jay Shoemaker, 84, a resident of Williamsburg since 1978, passed away on November 25, 2015. He was born and raised in NW Indiana near Chicago.
Rollin was preceded in death by his wife, Carole. They were married in 1956 and have three daughters and two sons-in-law: Laura Brennan of Harrisonburg; Linda and Michael Steadman of Amherst, NH; and Cris and Steve Tewksbury of Williamsburg. They have five grandchildren: Emily, Caroline and Genevieve Steadman; and Elizabeth and Rebecca Tewksbury.
Rollin graduated from Carleton College (Northfield, MN) in 1953 with a degree in Economics, and then he received an MBA from the University of Michigan. Following his college years, he was commissioned as an officer in the U.S. Navy Supply Corps. Subsequently, he joined IBM and then Tenneco, which owned Newport News Shipbuilding. For a year, he was on loan to the U. S. Government as a Presidential Exchange Executive in Washington. He retired from Tenneco in 1992.
Rollin has been active in civic affairs often related to Kiwanis. He was also on the Board of Mary Immaculate Hospital for ten years. His prime interests included his family, travel, computers and classical music.
Memorial gifts in his name can be made to the Virginia Symphony Orchestra, the Kiwanis Club of Williamsburg Foundation, or Bruton Parish Church. A family memorial will be held at a later date.