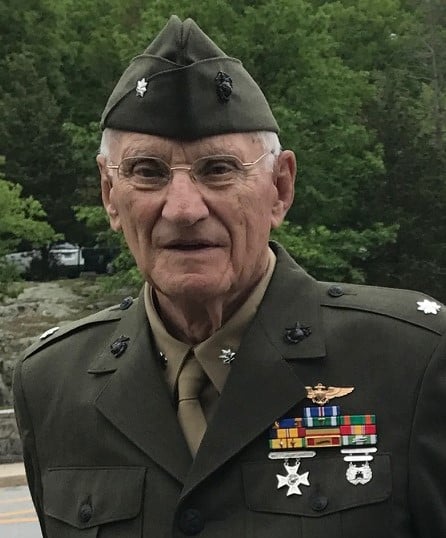 Lieutenant Colonel Robert Whitfield Smith, USMC (Ret.), age 86, died Monday, March 16, 2020 at Riverside Regional Medical Center in Newport News, Virginia with his loving wife of 60 years, Gloria, and his son, Greg, at his side.  Bob lived and died on his own terms and leaves his loving wife, two sons, a daughter-in-law, three grandchildren, two great grandchildren, and many nieces, nephews and countless friends and loved ones as his legacy.  His mother, Helen Smith, father, Stanley Smith, and sister, Sandra Johnson, preceded him in death.  Bob lived an amazing life.  He was born on June 26, 1933 in Orange, New Jersey.  He was the son of a blue collar American family and was the first in his family to attend college.  Upon graduating from Rutgers University in 1956 with a degree in History (which was his life-long passion), Bob entered the United States Marine Corps where he was commissioned as an infantry officer.  After service in Japan and Okinawa as an infantry platoon leader, he applied and was accepted to flight school and earned the gold wings of a Naval Aviator in 1960.  As a Marine helicopter pilot, he deployed on land and by sea throughout the world until the Vietnam War began in earnest in 1964.

In 1965, his squadron, VMO-2, was the first Marine helicopter squadron to deploy to Vietnam, and Bob was there.  He would spend the next year flying in support of American Marines and other U.S. and allied service members as the war in Vietnam heated up. Operating out of the expeditionary airfield at Da Nang, Bob and his squadron mates, participated in many small and large engagements with Vietnamese forces.  In August 1965, four VMO-2 UH-1 “Hueys” participated in America’s first nighttime helicopter assault in support of Operation Starlight.  On October 3rd, under the command of then Captain Robert W. Smith as flight leader, Marine Hueys were involved in an engagement with enemy forces in Le Son, south of Da Nang.  Throughout out the day, the pilots of VMO-2 provided armed close air and medevac support to Marine infantry units on the ground.  Under intense ground fire, two helicopters were damaged but remained on station to direct the landing of ground reinforcements and to strike from the air.  Returning to Da Nang to rearm and refuel, the Hueys under CPT Smith returned to battle and made repeated attacks and directed air strikes by fixed wing aircraft until well into the evening.  For his leadership and piloting skill in the face of intense enemy fire, Bob was awarded the Distinguished Flying Cross

Bob would return to Vietnam with VMO-2 again in 1968 when the squadron’s helicopters were augumented with OV-10A Bronco fixed wing aircraft that brought new close air support capabilities to the Marines.  Bob re-trained on fixed wing aircraft at Marine Corps Air Station Yuma in preparation for his second deployment with VMO-2 where he and the other VMO-2 aviators would spend the next 13 months in-country flying both Hueys and OV-10 Broncos in support of the war.  VMO-2 played a crucial role throughout the Vietnam War in supporting Marine operations in I Corps, and Bob was proud to have been a part of its storied history.

Bob returned to the U.S. in 1969 and assumed a different role for the Marine Corps – public information officer (PIO).  After earning a master’s degree in Mass Communications at the University of Wisconsin, Bob was was assigned PIO duties at Headquarters Marine Corps and served in that role until his retirement in June 1976 with more than 22 years of service.  When he retired, Bob became the editor of the Marine Corps Gazette, the professional magazine for officers of Marines.  While editor of the Gazette, he met Eugene B. Sledge and served as the editor for his best-selling book, With the Old Breed, which recounted Sledge’s experiences as a Marine infantryman in two of the bloodiest island assaults of World War II on Peleliu and Okinawa.  In his acknowledgements, Sledge wrote:

Deepest appreciation is extended to my editor Lt. Col. Robert W. Smith, USMC (Ret.).  During his last year as editor of the Marine Corps Gazette, he become interested in seeing this complete account in book form during our work on extracts. . . His interest has been my good fortune.  In addition to his vast editing skill, Bob as has been an inexhaustible source of good ideas and advice.  On more than one occasion, he has bolstered my sagging morale when I’ve become weary with what is not a happy subject.  His objectivity has guided me through the forest when I couldn’t see the trees, and when it was painful to both of us to omit parts of the original.  I am grateful for his sensitivity and impeccable professionalism.

Bob eventually left the Gazette and embarked on a 15 year, second-act career in the defense and wargame industry.  He retired for good in 1997, but he was just getting started.  With an incredibly active mind and blessed with many years of excellent health, which he worked assiduously at maintaining until he died, he and Gloria traveled the U.S. and the world for 20 years.  They visited Europe several times, cruised around New Zealand, and as part of the Elderhostel community, become Road Scholars soaking up educational adventures throughout the globe.  Constantly curious and constantly with a book in his hand, Bob was an erudite thinker and formidable opponent in any trivia game.  Later in life bob became an elder in the churches that he and Gloria attended and continued to serve the congregation at Williamsburg Presbyterian Church until he died.

Bob loved his family and was especially proud of his three grandchildren – a highly accomplished musician and singer, a successful businesswoman and mother, and an Army officer and graduate student.  He never missed a sporting event or concert that he was able to attend, and he attended dozens of them.  One of his proudest moments was attending the graduation of his grandson from the United States Military Academy, where he assisted in commissioning him as an officer in the U.S. Army.  Bob ordered a new Marine Corps uniform for the occasion, and the photo of him and his newly commissioned grandson standing tall in their uniforms by Lusk Reservoir on the West Point campus was one of his most cherished photographs.

The loss of our husband, father, grandfather, great grandfather, and uncle is deeply felt.  We are heart-broken, and the world will never be quite as bright for us as it was before his death.  But we will soldier on as Bob would have wanted us to, and we will continue to embrace life as he did.  Bob and Gloria had 60 years together, and their love and the legacy it produced will carry on through the generations that follow.  Rest in peace with our Heavenly Father, Bob (Dad), and we will see you again one day in the light of His glory.