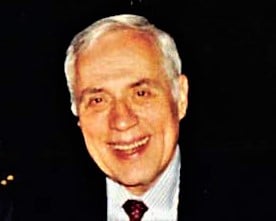 PROSL, Richard Hale, “Dick”, of Williamsburg, passed away peacefully on February 14th, 2021. He is survived by his beloved wife of 57 years, Carol Lovell Prosl, and daughters, Elizabeth P. Arnold (Jeff) of Brentwood, TN, Karen P. Firestone (Rob) of Midlothian, VA, and grandchildren, Caitlyn, Kyle, and Hayley. He is also survived by his sisters, Janet Ragland (Ron) of Richmond, VA, and Nancy Mader (Fred) of Staunton, VA. His parents, Harry and Verna Prosl predeceased him.

Richard was born in Springfield, MA on April 21st, 1938. Richard attended the College of William of Mary (class of ‘59). He received his B.S. from William and Mary, a B.A. and M.A. from Oxford University (England) and his M.S. and Ph.D. from Rensselaer Polytechnic Institute.

Richard H. Prosl joined the faculty of the College of William and Mary in 1966 as a professor of Mathematics. In the fall of 1984, Professor Prosl joined with other mathematicians and computer scientists to form the Department of Computer Science, which he chaired for many years. Professor Prosl was best known by his colleagues for his truly outstanding record of service to his alma mater. He served as a freshman/sophomore advisor for thirty-four years and as a Faculty Marshal for thirty-five years, the last eleven as Chief Marshal; leading academic processions at graduations and other official ceremonies.

His enthusiasm for teaching was central to his career. He is best remembered by his students for his course in computer graphics. Students always enjoyed his sense of humor and style of teaching. His Monday, Wednesday, Friday, 8am classes were always a “full house”. He is remembered for always taking the time to talk with students, and he shared a genuine interest in making meaningful connections. Dick also served on the Board of the Wesley Foundation of the College of William and Mary.

In his personal and professional life, Dick was known for his warmth, wit and intellect.

In lieu of flowers, contributions can be made to the Respite Care Program at Williamsburg United Methodist Church (WUMC Respite, 500 Jamestown Rd., Williamsburg, VA), or to the Fund for William and Mary (giving.wm.edu).