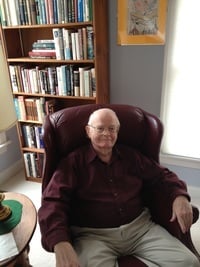 A resident of Fords Colony, Williamsburg VA, born in Hawthorne, NJ on April 4, 1934 to Frank and Vera Robinson.

Richard graduated from Fairleigh Dickinson University in 1958 and received his Masterís Degree in 1976 from Virginia Tech in Mathematics. He retired in 1990 after 30 years from the Mitre Corporation. After his retirement, they traveled extensively in the US and Europe.