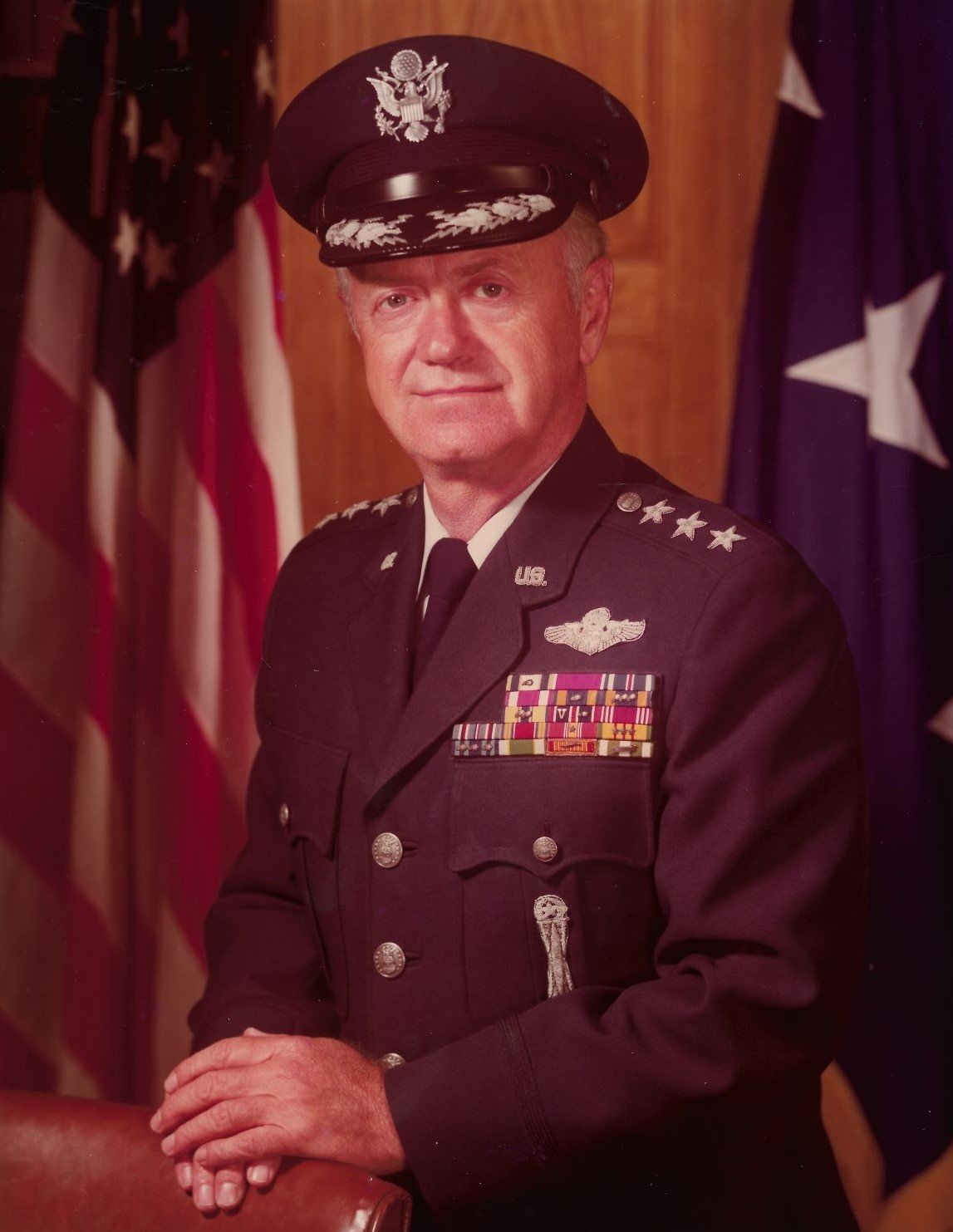 Richard (Dick) Charles Henry, 94, of Williamsburg, VA passed away at his home with family by his side July 5, 2020. He was a devoted husband, father, brother, and served his country in the US Air Force for over 35 years. Dick was born in LaSalle County in north central Illinois on Dec 17, 1925. Dick grew up on a farm which gave him a strong work ethic. He attended a one room school house until he went to Streator High School.  Dick’s work ethic and persistence served him well throughout his life and military career.

While at the school house, three times a week the mail plane would fly over and their teacher would send the class outside to wave at the plane.  One day, the plane turned and landed at the field across from the school house and everyone went to look.  Dick was hooked! When his parents visited relatives in Colorado, where Dick’s uncle was an instructor pilot, he took Dick for his first open cockpit ride.  The hook was set!

Dick wanted a college education and knew that his family couldn’t afford it and he really was not interested in farming.  While bailing hay one summer his coworker, a friend home from college, suggested he go to West Point, “What’s that?” he asked. “Get hold of your senator, he’ll tell you what to do” was the reply, and he did. He tested three times and passed with high marks every time but there was always someone in front of him. He then enlisted in the Army in 1944 and earned his PFC stripe.  The Army found out about his urge to attend West Point and were impressed with his aptitude and strong ethics.  When his company was shipped to Europe in 1944 he was held back and sent to West Point the following year.  As a sub note, his company fought at the Battle of the Bulge and suffered 100% casualties.

After graduating from the US Military Academy, Dick was one of the first classes to be able to go into the newly formed US Air Force. He married his beloved wife Cherry Barton on Dec 27th, 1949 and spent their honeymoon en route to Vance AFB for pilot training. So began Dick and Cherry Henry’s adventurous life.

Dick was able to have a very diverse career in the Air Force. Starting out in bombers, B-50’s, he then went to University of Michigan to get his two master’s degrees in aeronautical and instrumentation engineering. From there, Dick became involved in the expanding US space program. Some of his contributions included:

1.) As a Captain, he was tasked with finding a home for what is now Vandenberg Air Force Base. (The decision was finalized with a piece of string.)

2.) Worked on the development of the LEM/Command

Module concept for going to the moon.

3.) Contributed to the then secret Gemini MOLE project.

4.) Manager, Gemini Control, for duration of the Gemini

including the very first shuttle launch while commander of SMSO.

6.) After the concept of GPS was rejected by the Army and Navy, he convinced the Air Force to fund it and test its viability while commander of SMSO.  (Tell Google to say thank you.)

7.) Unable to convince President Carter to create a separate military branch devoted to space he went on to help create Space Command and served as the Vice Commander for the balance of his career.

One of the greatest awards he received was “The Order of the Sword” from the non-commissioned officers for his success in establishing affordable base housing in Los Angeles for SMSO NCO’s. At the time, assignment to SMSO in Las Angles was considered extreme financial hardship for NCO’s and lower ranked officers.

Though Dick loved his work, he missed flying and wanted to be a fighter pilot. He became an F-4 pilot and served as vice commander of the 37th Tactical Fighter Wing Phu Cat Air base in Vietnam where he flew over 200 combat missions.

After Vietnam and a few tours doing staff work, commander 33rd TAC, TAC IG, Air Force Budget Defense, Dick finished up his career as commander of SMSO in El Segundo Ca. As commander, Dick was instrumental in creating Space Command where he served as Vice commander until retirement. Dick began his military career in the newly formed US Air Force and he finished his career with the vision to help create Space Command a precursor to the US Space Force. Dick retired as a Lieutenant General on May 1st, 1983. For more details on Dick’s Air Force Career, please visit USAF BIO.

Along with Dick’s devotion to the progress of the Air Force, Dick also loved tennis, sailing, and flying. Dick became an avid tennis player though he didn’t start to play until his 30s. In his retirement, he was very proud of building his own airplane and also being able to fly until he was 84 years old! Dick also had adventures sailing in California, Florida, and Virginia. Dick loved to travel with his wife Cherry making wonderful memories cruising with their friends, traveling to Israel, and bareboating in the Virgin Islands. When not traveling, Dick spent his free time visiting and playing with his grandchildren. He deeply loved his wife Cherry and was devoted to her and her to him for all of their 70 plus years together.

He is preceded in death by his parents Mary and Harley Henry, his brother Robert Henry, and his granddaughter Melissa Henry. Dick is survived by his wife of 70 years Cherry Barton Henry; his sister Betty Calkins of Ottawa, Ill; his children Nan, Bart and his wife Becky and Pam and her husband Brent; nine grandchildren and four great grandchildren.

There will be a memorial service at Patriots Colony at a later date and then Dick will be interred at the US Air Force Academy. In lieu of flowers, please make donations in memory of Richard Henry to:

or online at  tinyurl.com/MyWPCGiving or through the church website, mywpc.org.

You may Google ‘Gen Richard C. Henry USAF Bio’ for his official military biography and search Wikipedia for an excellent article about the ‘Order of the Sword’.