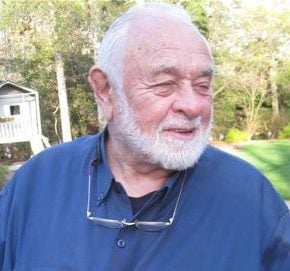 Rudolph ‘Rudy’ D. Nabel passed away at age 86 on February 26, 2021 in Williamsburg, VA.  Rudy was born in New Rochelle, NY on December 3, 1934 and grew up in White Plains, NY.   His parents, Rudolph and Mary Ann (Sumetz) Nabel, started Nabel’s Nurseries in 1942.  At age 8, Rudy was learning to follow in his father’s footsteps.  After the passing of his parents, Rudy became the proud owner of Nabel’s Nurseries where he worked until his retirement.  The business continued until his youngest brother, Paul, retired.

Rudy was predeceased by both parents, as well as his first wife, Joan Carmen Nabel, their daughter Marlene, his sister, Erica Nabel Hogle and his younger brother, John Nabel.

Rudy and Deirdre enjoyed many years together and traveled extensively throughout the world.  They particularly enjoyed visiting Deirdre’s beloved family in Ireland.

Rudy was blessed with many friends and business associates through his membership in several Nurseryman’s Associations and the floral displays he created for Rockefeller Center and Bryant Park in New York City.  He was also a member of the White Plains Beautification Foundation.  After retirement, his love for flowers continued by actively participating in district Rose Shows of the American Rose Society and his generous support for the beautification of the Williamsburg Botanical Garden.  So many will miss Rudy’s wisdom, wit and outgoing personality.

The Nabel family will have a private viewing at Ballard-Durand Funeral Home in White Plains, NY, followed by entombment at Ferncliff Mausoleum in Hartsdale, NY.  In lieu of flowers, please give to a charity of your choice.