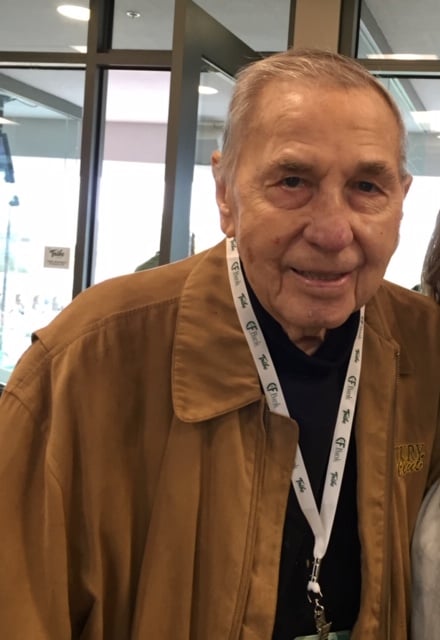 Philip Oliver Richardson passed away peacefully on Christmas Day, 2018 at age 91 in Williamsburg, Virginia. On the previous Sunday, he had hosted the Annual Richardson Family Christmas party with family and dear friends, one of his favorite events of the year.

Phil was born to Philip and Helen Richardson in Toano, Virginia on August 8, 1927. He grew up on the family farm with five older siblings who predeceased him. Upon graduating from Toano High School, Phil entered the US Navy where he served as the Admiral’s Yeoman in Tokyo at the close of WWII. Upon returning to Virginia, he lived in Richmond where he married Mary T. Naylor. He apprenticed with a large construction firm in Richmond before moving to Williamsburg and venturing on his own to open Philip Richardson Company in the mid-1950s.

In a real sense, Phil’s legacy was Williamsburg itself. On any given drive through town you can spot numerous buildings he constructed including many familiar landmarks in Williamsburg and Colonial Williamsburg, including the United Methodist Church on Jamestown Road, the old U.S. Post Office on Francis Street, the Regency Room at the Williamsburg Inn, Regency Apartments, as well as many hotels, restaurants, and shopping centers in and around town.

Phil Richardson served on advisory boards for Colonial Williamsburg, the City of Williamsburg and James City County, the Chamber of Commerce, Williamsburg Community Hospital, and the College of William and Mary Athletics. His energetic spirit, keen intellect, and his visionary ideas contributed greatly to the growth of his beloved town. He continued to conceive plans and ideas for building projects up to his final days. Most people retire but not Phil Richardson! He was well respected by his business associates and by the many employees who knew him as a fair and dependable employer, always generous and willing to lend a helping hand when asked. The family thanks them all for their care and dedication over the years, and expresses its special gratitude to Ms. Imee Duke, who cared for him devotedly over the last several years until his final hours.

Grandchildren Holly and Sam Richardson, Valerie (Hoffman), Dana, and Benjamin Porush, and Ryan and Caroline Richardson mourn their “Pa,” as he was fondly known to them. He also had four great-granddaughters, Siona, Perri, Edie and Noa Hoffman as well as many nieces and nephews and other dear friends and family who will miss him.

A Memorial Service and Celebration of Phil’s life will be held on Wednesday, January 2, 2019 at 2:00 PM at the Williamsburg United Methodist Church, 500 Jamestown Road, Williamsburg, which he proudly built. Friends and family are invited to attend. Burial will be private. Bucktrout Funeral Home is entrusted with the funeral arrangements.

In lieu of flowers, contributions may be made to the Williamsburg United Methodist Church, or the College of William and Mary Tribe Club (Box 399, Williamsburg, VA 23187).