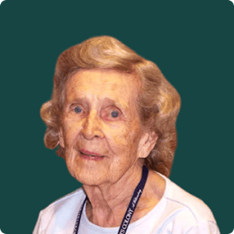 Patricia Adele (Albers) Bateman, 99, born January 16, 1923, in Alameda, California, departed this life peacefully on October 16, 2022, in Williamsburg, Virginia. As a little girl on the beach in Alameda, California while watching Pan American “China Clipper” seaplanes land on San Francisco Bay, little did she know that she would marry a Pan American pilot, John William Bateman, and travel the world with him.  Over the course of their seventy years together, they raised three children, built the family home in Setauket, New York, working side-by-side, and upon John’s retirement in 1979, moved as “come here’s” to Mathews.  They renovated their home on the East River and as she always said, they were the best years of their lives, enjoying family and friends and the scenic beauty of the river.

She taught herself many skills from upholstery, furniture restoration, financial investing, to millinery, sewing, and needle arts.  She passed on her thriftiness and resourcefulness to her children and grandchildren who were amazed at how she could save so many items and reuse or repurpose them.

Pat was outspoken and believed in giving to others while living so that she was able to see how it benefitted them.  She was a leader and an entrepreneur from a young age when she made herself the neighborhood librarian lending books to other children and then during high school, was Vice President of her senior class.  Pat enjoyed taking charge and getting things done as was evident from her memberships in the Mathews Yacht Club, Historical Society, Garden Club, and Woman’s Club.  She was Chairperson of the committee that produced “The Flavor of Mathews”, a series of cookbooks which raised enough funds to completely restore the Woman’s Club facility and provide donations to local charities.

Pat started several businesses beginning with genealogy in 1976, after she did extensive research on her family and then expanded those services to others.  Her second business was borne from her passion for sewing when she made doll clothes for her granddaughter’s first American Girl doll.   She delighted generations of Tidewater girls and their mothers with her Molly B line of doll clothes as an annual vendor at Mathews Market Days and later sold her line through Sibley’s General Store.

As she aged, people would often comment that she was amazing but she never really believed it.   Mom/Grandma Pat, you really were truly amazing and you are much loved, will be dearly missed, and forever in our hearts.

Survived by her children: James (Liz), Doug, and Diana Lacke (Tim); five grandchildren: Brandon, John, Mike, Stephanie, and Greg, and six great grandchildren: Nathan, Evan, Branson, Mia, Finn and Adeline.  Her internment will be at Arlington National Cemetery next to her beloved husband.

Memorial donations in memory of Pat may be made to Hands Across Mathews.