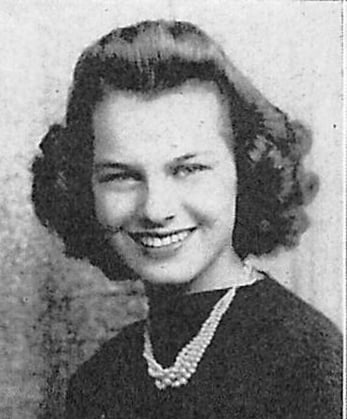 From her birth in Sioux City, Iowa, to the wife and life partner of a career Foreign Service Officer, Norma Joanne Erickson Olson exemplified the talent, ambition and commitment to service of the greatest generation.

After graduating from Augustana College in Rock Island, Illinois, Norma worked as a Speech Therapist until the end of the war when the love of her life, Grant W. Olson, returned from overseas duty as a codebreaker in India. They married in Sioux City before the G. I. Bill took them to Stockholm, at which time Norma worked in the U.S. Embassy.

When Grant joined the Foreign Service, Norma endured the then-grueling training expected of diplomats’ wives. Over the course of their career, she learned three languages, studied cooking with Julia Child in Oslo and bore four children, Lane (Steve) of Williamsburg; BJ (Kurt) of Palo Alto, California; Kip of Leesburg, Virginia;  and Lise of Menlo Park, California. She is survived by six grandchildren and two great-grandchildren.

Norma and Grant retired in Kingsmill and, eventually, moved into The Landing, where they were active volunteers, golfers, bridge players and gourmet dinner hosts. Norma was recently honored for 50 years of service for her long membership in P.E.O. and for her hospital volunteerism.

Norma will be remembered as a loyal friend, a gourmet cook, and extraordinary hostess and a devoted mother and grandmother. Her wit and sparkle will be missed. A celebration of her life will be held at The Landing at a future date. In lieu of flowers, contributions may be made to the Williamsburg Landing’s Benevolence Fund, 5700 Williamsburg Landing Drive, Williamsburg, VA 23185