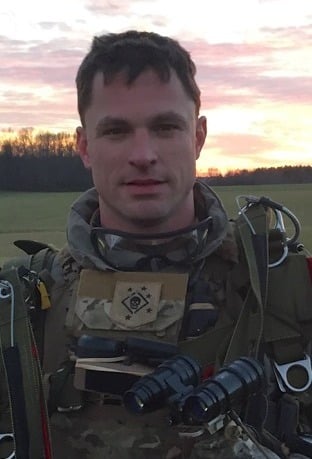 MSgt. Thomas Arthur Vaughan Saunders, 33, died March 10, 2015 in a helicopter crash off the coast of Eglin Air Force Base in Florida, together with ten of his comrades-in-arms. Tom was born in Bonn, Germany to M. Allen and Barbara G. Saunders on May 28, 1981. He was the grandson of J.E. and Marie Saunders and of Major-General and Mrs. Francis Greenlief. He lived in Europe and the Middle East during his family’s Foreign Service career, during which time he was active as a Boy Scout. Upon returning to the US he graduated from Hargrave Military Academy in Chatham, Virginia, where he attained the rank of Eagle Scout and was an honor graduate.

Two weeks after graduation Tom entered the Marine Corps, serving numerous tours in the Middle East, Asia, and Africa. Most recently he had multiple combat deployments in Iraq and Afghanistan. He was a Team Chief in the Marine Special Operations Command (MARSOC). In 2014 he was presented the Marine Corps Critical Skills Operator of the Year award. His fellow Marines recognized his aggressive leadership, his resourcefulness, and his gift for mentoring and challenging his team members to be and to give their best as partners in accomplishing their missions. They recognized and cherished his focus on the well-being of his team and their families.

Tom was an enthusiastic hunter and fisherman and particularly enjoyed playing the guitar with family members and fellow Marines. He began developing this skill an early age, playing everything from old time, bluegrass, and Irish music to contemporary. He shared his talent with his fellow Marines during deployments, raising spirits and giving them a small piece of home while they were away

Tom’s life was the ultimate embodiment of the motto of MARSOC, “Never Above You, Never Below You, Always Beside You”, and he lived by the Marine code, “Semper Fidelis”.

Left behind are Tom’s wife, Danielle, and their 20-month-old son Vaughan. He is also survived by his parents; a sister, Anne, her husband and children; and a brother, John, and his wife Whitney. He also had aunts, uncles, cousins, and Godparents, all of whom he deeply loved.

Memorial donations may be made to any of the following organizations befitting the Special Operations community: semperfifund.org; raisingraiders.org; marsocfoundation.org.