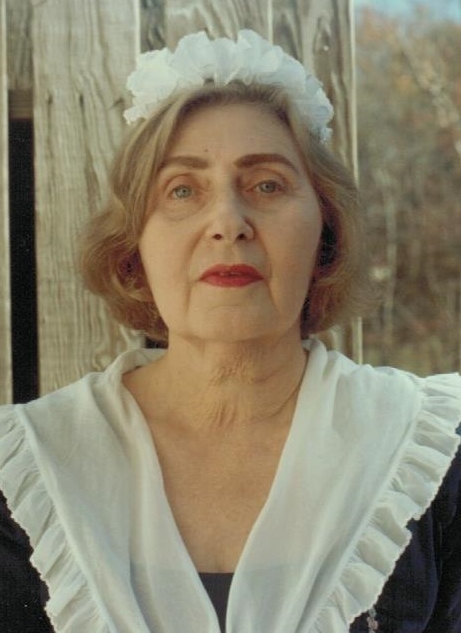 Williamsburg – Mildred Arthur – beloved wife and mother, published author, and former Hostess/Historical Interpreter for the Colonial Williamsburg Foundation for many years — passed away quietly at her home on December 17, 2014. A long-time resident of Williamsburg, Mrs. Arthur was 95 years old.

Born in Philadelphia on September 20th, 1919, Mrs. Arthur moved with her family (sisters Hannah and Thelma and parents Clara and Benjamin Hirsch) to Bel Air, Maryland, in 1924. Her parents went on to found a successful men’s haberdashery and tailoring shop; Hirsch’s Men’s Store was a fixture on Bel Air’s Main Street for over 80 years.

Mrs. Arthur graduated from Bel Air High School in 1936, and then attended the University of Baltimore. An avid student, she earned her B.B.A. degree and graduated in 1939 at the top of her class, as valedictorian. While there, she met Eric Arthur — then a student in the law school, as well as a budding actor and author; they married in 1942. While Mr. Arthur served in the Army, Mrs. Arthur worked in the Social Service Department at Mt. Sinai Hospital in Philadelphia and studied sociology and criminology at the University of Pennsylvania.

After the war, Mrs. Arthur began to actively pursue her literary interests; she sold her first short story, “The Queen is Dead,” to Ellery Queen’s Mystery Magazine in 1949. The magazine’s legendary editor, Frederic Dannay, was so impressed with Mrs. Arthur’s work that he awarded it the prize that year for best first-published short story. Subsequently it was televised on NBC’s classic “Lights Out” series; Mrs. Arthur’s husband Eric, by then also a successful writer for radio and network television, wrote the TV adaptation.

Mrs. Arthur went on to publish three more short stories in EQMM over the years, as well as other fiction for adult and juvenile audiences in publications including the Nimrod Literary Review, Ingenue, Datebook, the Instructor, Grade Teacher, and other magazines. Harvey House also illustrated and published her first non-fiction book for young people, “Holidays of Legend,” in 1971.

Moving first with her husband to New Jersey, where they began raising daughters Julie and Sharon, and later to Newport News and Williamsburg, Virginia, Mrs. Arthur maintained her literary pursuits. While working as a costumed Hostess/Historical Interpreter for Colonial Williamsburg from 1974 through 1989, she also researched and wrote two historical articles published in the Journal of the Colonial Williamsburg Foundation.

After retiring from her hostess position, she continued to work for Colonial Williamsburg through 1994 as a volunteer docent, giving tours to guests at the Abbey Aldrich Rockefeller Museum and at the DeWitt Wallace Decorative Arts Gallery. She was widely regarded for her personal warmth, her depth of knowledge, and her skills in historical interpretation. These qualities were noted by Jonathan Yardley, Pulitzer prize-winning book critic and columnist for the Washington Post, in his 1993 book “States of Mind – A Personal Journey Through the Mid-Atlantic,” where he praised her by name in describing his visit to the Colonial Capitol.

After retiring from her docent work, Mrs. Arthur continued to pursue her life-long literary interests in reading and in writing. Her love of family, her intellectual curiosity, her commitment to learning, and her warm interest in everyone she encountered remained with her throughout her life.

Mrs. Arthur is survived by her daughters Julie, an instructional writer, and Sharon, an artist and writer. She is predeceased by her husband of nearly 65 years, Eric, her sisters Thelma and Hannah, and her parents Clara and Benjamin.

A graveside service will be conducted at 10:30 AM on Tuesday, December 23rd, at the Cedar Grove Cemetery in Williamsburg, Virginia. Arrangements are by the Bucktrout Funeral Home in Williamsburg. In lieu of flowers, please send donations to the Alzheimers’ Association.