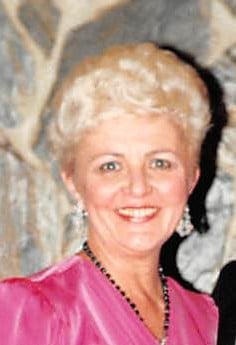 Born Dec. 30, 1935, in New London, Conn., “Mary Kay” was the daughter of Arthur and Patricia Buckley and graduated from Williams Memorial Institute in 1953. In 1957, she attended Grace Downs Air Career School, a New York City academy “for girls who like adventure and travel plus a fine salary.” After she earned her wings, she flew as a stewardess for Capital Airlines for two years.

In June 1959, Mary Kay married Roland Clarke Bilyeu at the Naval Submarine Base New London Chapel. She moved dozens of times, all over the world, with her naval officer husband and three children, making friends everywhere she went. She was active in many Officers’ Wives Club activities, and the children’s many baseball, softball, swim and soccer team events. Mary Kay was a regular volunteer at the Anheuser-Busch Golf Classic, an event she adored. She also enjoyed playing games, most notably Bridge and her beloved mah-jongg, which she was first introduced to while living in Japan.

She was preceded in death by her parents and her son, Jeff.

Mary Kay leaves to cherish her memory her husband of 60 years Capt. R.C. Bilyeu, USN (Ret); her sister, Patricia B. Stoffel of Arlington; her daughter, Pam Cohen of Virginia Beach; her son, Greg Bilyeu and his wife, Stephanie Fulenwider Bilyeu of Richmond; grandsons Jostin Bilyeu and his wife Meghan of Cary, N.C.; Parker and Spencer Cohen of Virginia Beach; great grandchildren Ramona and Clarke; and many loving cousins, relatives and of course, friends.

The family will receive friends on Saturday, July 27, from 4 to 6 p.m. at Bucktrout Funeral Home in Williamsburg.