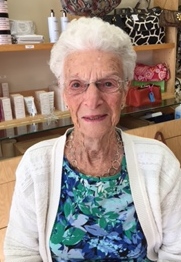 Mary Irene Wood Saunders, 94, passed away on September 14, 2017 in Williamsburg, Virginia, due to complications.

Mrs. Saunders was born on February 15, 1923 in Greenbelt, Maryland to her parents, William Wallace and Esther Wood. She married Earl Tucker Saunders of Earlysville, Virginia on April 18, 1941. The Saunders moved to Arlingotn, Virginia where Earl worked as a carpenter, while Mary raised 4 beautiful daughters. Upon retirement, Earl and Mary resided in Popano Beach, Florida where she learned to play golf. Mary was quite the avid golfer and was cedited with 8 holes in one.

Mrs. Saunders was a caregiver to many. She was a loving and devoted wife, mother, grandmother, aunt and friend. She loved to cook for her family and enjoyed sewing. Mrs. Saunders had a witty sense of humor. She gave as good as she got. One family reunion, she made a family trivia quiz for all of us to play. One question was to name the seven dwarves. She was insistent that Snoopy was one of the seven. She would not take no for an answer! That same reunion, she surprised all of us with Christmas in July. She had gone out earlier and found a small tree in the woods. She brought in back to the house and decorated it along with other paper plate decorations. She had us all walk up the stairs backwards to surprise us. She had presents for all of us wrapped under the tree. Mrs. Saunders loved her time with her family. She loved to travel as she got older, especially cruising and riding in the RV. A favorite pastime of hers was playing cards and bingo. She was known to prematurley yell bingo and was nicknamed Bingo Mary. Mrs. Saunders was most comforted by watching Father Ray Kelly on Youtube as he sang Hallelujah. She was the light to all she met and will be truly missed.

Someone once said, “We do not stop playing because we are old ; we grow old because we stop playing. There are only two secrets to staying young, being happy and achieving success. You’ve got to have a big dream. When you lose your dreams, you die.” Mrs. Saunders lived a full, happy, succesful life.

Mrs. Saunders will be cremated and her ashes will be spread in a private memorial service with family at a later date.