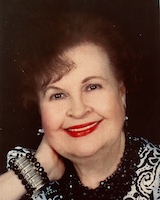 Mary Ann Singletary passed away in Williamsburg, Virginia on January 15, 2021, at the
age of 84.

She was born in Northampton County on the Eastern Shore of Virginia. She was the daughter of the late Elizabeth and Arthur Henderson. She is survived by one sister, Margaret Snyder of Gaithersburg, Maryland. After high school, she went to Washington D.C. and was employed by the C&P Telephone Company. Also, she worked for two law firms.

Mary Ann was a member of Bruton Parish Episcopal Church where she served on the College Committee, Pastoral Committee and was an usher. She was known for her big smile and outgoing personality. She was also known for her flair and fashion in clothes. She modeled for the Christian Women’s Club while she was a member and served on the Telephone and Hostess Committee for years. She was a pioneer in starting the first Care Line for the Alzheimer’s Association in Williamsburg.

Contributions may be made to the Cancer Fund and to the Bruton Parish Episcopal Church Fund.

A memorial service will be announced at a later date.