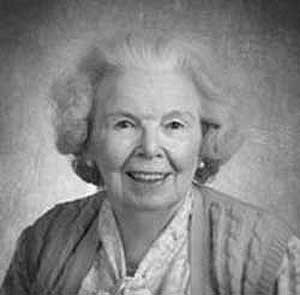 Marion (nee Morrell) Robinson, a longtime resident of Williamsburg, Virginia, was born in New York City on January 26, 1915.  She passed after a short illness on October 16, 2017, at age 102.  Marion had been a resident of Staten Island, NY for over 60 years.  She graduated from Curtis High School on Staten Island in 1932 and went on to graduate from Brooklyn College, NY in 1936.  She was a founding member of the Beta Beta Chapter of Kappa Delta Sorority at Brooklyn College.  She earned her MA Degree in Economics in 1939.  Marion retired from teaching after 35 years at Curtis High School.

Marion was a founding member of the Daughters of the King Chapter, Bruton Parish Church, Williamsburg, Virginia.  She was also a member of Colonial Dames of America, Daughters of the American Revolution and Order of the Eastern Star.  She was preceded in death by her husband, Joseph Frederick Robinson; and her daughter-in-law, Jane Robinson.  She is survived by her children, Frederick Robinson and Rosemary Hough; their spouses, Sandra and Richard; and her six grandchildren, Richard Hough, Andrew Hough, Melinda Sims, Heather Brownlie, Frederick Robinson and Christopher Robinson; and their spouses. Additionally, she was blessed with fifteen great-grandchildren.   A funeral service will be held at 11:00 am on October 27, 2017, at Bruton Parish Church, Williamsburg, Virginia, with a reception following.  Interment will be at Arlington National Cemetery, where she will join her beloved husband Joseph Frederick Robinson.