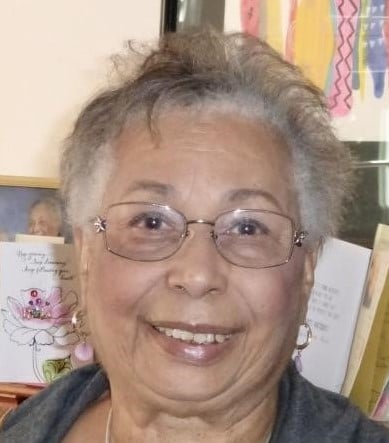 On July 3, 2019, after a long series of battles for her health, Marilyn S. Taylor has gone to rest with our Lord while surrounded by her family.

Marilyn S. Taylor was born in Detroit Michigan on September 27, 1940.  She graduated from Detroit’s Cass Technical All City High School, Michigan State University with a bachelor’s of social work and where she was a charter member of the Delta Sigma Theta Sorority Epsilon Epsilon chapter and Howard University’s School of Social Work with a master’s in social work.  She spent most of her career as a social worker in the Stanford, CT school system.

Upon her retirement, and leaving their home in Westchester, NY, she relocated to Williamsburg, VA with her husband Robert. While getting settled, she started a support group for stroke patients and their caregivers for Williamsburg Hospital. She served as a member of the James City County Comprehensive Planning Team. She was a member of the Williamsburg Chapter of Delta Sigma Theta Sorority, Newport News chapter of the Links, Inc. and the Lunch Bunch. Marilyn was the founder and first president of the Greater Williamsburg Women’s Association and one of the signature achievements during her tenure was the Cultural Arts Experience for middle schoolers in partnership with the Muscarelle Museum.

Nearly every summer, since she was six months old, was spent at the famed African American summer resort of Idlewild, Michigan where she later served as president of the Idlewild Lot Owners Association, The Paradise Lake Association, and the Idlewild Delta Sigma Theta local organization.

Marilyn was a faithful worker for the Williamsburg Presbyterian Church where she held numerous positions including Elder, Moderator of the Presbyterian Women, Member of the Session, Knitters’ Circle Coordinator and Nominating Committee. She loved her Disciple Class, Women’s Circle 7 and the Outreach Committee.

We want to thank the caring staffs of Sentara Williamsburg, Patriots’ Colony Convalescent Center and VCU Health’ STICU and Palliative Care Units.  Special thanks go to our wonderful neighbors Ken and Kay Lynch and Jean Young.

A Celebration of Marilyn’s life will be held at the Williamsburg Presbyterian Church, August 24, 2019 at 2pm.

The family asks that in lieu of flowers that donations be made to the Muscarelle Museum’s Cultural Arts Experience, Office of University Advancement, The College of William and Mary, PO Box 1693, Williamsburg, VA 23187-1693.