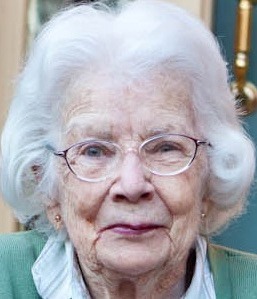 Williamsburg – Margaret “Peg” Goodrich, 93 passed away peacefully on Monday, December 22, 2014. Peg was born in Jacksonville, Florida on November 14, 1921 to the late James and Margaret Wilkinson. She lived in Washington DC during most of her early years, later moving to Kansas City, Missouri. At the beginning of WWII, she enlisted in the Coast Guard Women’s Auxiliary, SPARS, and was stationed in Seattle, Washington. It was there she met and married her future husband, Phil Goodrich. After the war Peg and Phil settled in Ithaca, Michigan, and she lived in that area until 2001 when she moved to Williamsburg, Virginia.

Peg enjoyed all forms of needlework, and her family will cherish the many quilts that she made for them over the years. She also loved to spend time gardening, playing bridge and decorating dollhouses that she and her husband built.

Peg is preceded in death by her husband of 37 years, Phil Goodrich. She is survived by her children, Peggy Barron (Dick) of Williamsburg, Jim Goodrich of Michigan, and Phyllis Bryan of St. Croix, VI; seven grandchildren and ten great-grandchildren. She is also survived by a sister, Sally McCann of Ohio and a brother, Bob Wilkinson of Maryland.

A private burial will be held at a later date in Michigan. Donations may be made in Peg’s memory to Bruton Parish Church in Williamsburg or a favorite charity. The family wishes to extend a special thank you to the caring staff at Chambrel’s Assisted Living center.