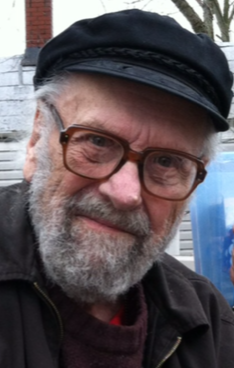 Born Aug 9, 1924 in Camden NJ to George Luce Sr. and Elma (Forbaugh) Luce. The oldest of three, his two brothers Roger (deceased) and David grew up in Palmyra NJ. The day after he graduated High School in 1943, he got on a bus and went to WWII. First going to Ft. Dix for processing and then to Ft. McClellan for training. He was assigned to schooling in NYC at CCNY for math and general education before going to Ft. Monmouth for Signal Corp training. Sent to Europe he was deployed to a hill outside Kaiserslautern Germany as part of a radio telephone relay station. At the end of the war in Europe he immediately was sent through the Panama Canal to take part in the war in the Pacific. He was on a ship off Okinawa celebrating his 21st birthday when it was announced that the second atomic bomb had been dropped on Nagasaki that day. He then became part of the occupying force and, spent time stationed at Koshien Stadium near Kobe as a company clerk.

After the war he got his degree in Economics from Temple University. He was enrolled in ROTC at Temple in a Transportation dedicated program. He met his wife born Geraldine Niles of Newport News while attending training at Ft. Eustis in the summer of his senior year. Married in St Vincent de Paul’s Catholic Church in NN he was stationed at Ft. Eustis where his first child was born.

As part of his combat arms tour he was stationed at Ft. Bliss and was able to witness two atomic bomb blasts in New Mexico. His description of that incident was sobering. His second child was born during this time. Serving in the AAA during the Korean conflict he went from there to Hawaii where his third child was born. From Hawaii he returned with family to Ft Eustis where his fourth and fifth children were born. His sixth child was born in Verdun, France while the family was stationed there. The family lived off post in the Chateau Boudelai and flourished while there. His last deployment with family was to Taegu, Korea where he was a member of KMAG; during this time he was the American liaison to the famous Korean White Horse division on their movement to Vietnam. After the family returned to Williamsburg, he was sent almost immediately to Vietnam for his first tour. He was in Saigon for the Tet offensive. On his second tour he was assigned to Saigon where he was in command of the motor pools there. His work was exemplary, and he received the Bronze Star for Meritorious Service.

He is survived by one brother and his six children Deborah, Karen, George III, Judith, Elishia and Suzzanne; numerous grandchildren and great-grandchildren. The interment will be in Arlington National Cemetery where he will reunite with his beloved wife, Gerry. Never an easy man to live with he will be missed.