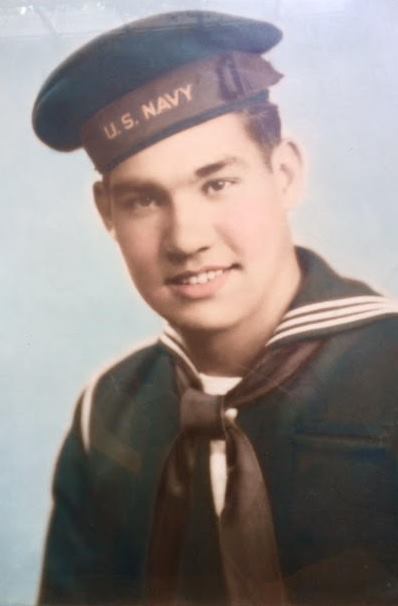 Louis M. Personte, 92, of Williamsburg, Virginia, passed away on Saturday, August 13, 2016, surrounded by his close family.

“Lou”, as he was known to friends, was the eldest of seven children born to Italian immigrants. He grew up in Rochester, New York, where he started playing music at an early age. After his graduation from Edison Tech High School, he auditioned for the Glenn Miller Army Air Corps Band and was accepted for a chair; however, prior to processing, he was drafted into the U.S. Navy. He served from June 1943 to March 1946, including 19 months in Guam. After his honorable discharge into civilian life, he married Rosetta Ruth Bragg. He then earned his B.S. in Mechanical Engineering at Tri-State College in Angola, Indiana in 1952. With the exception of a one year reassignment to alternative duties with the Air Force, his career was spent in various positions with the Department of Defense and Newport News Shipbuilding during which he was also a member of the Society of Naval Architects. He retired from the Supervisor of Shipbuilding, U.S. Navy Engineering Department in May, 1987.

Throughout his life he was known for his work ethic and gentlemanly demeanor. His sense of humor brought joy to all.

Lou is survived by his only child, Patricia P. Whisnant, and his only grandchild, Stephanie Whisnant Cash, along with his brothers Frank and James Personte and several nieces and nephews. He was pre-deceased by his wife Rosetta and siblings Anthony, Samuel, Rose, and Joseph.

The family would like to thank the staff of Colonial Manor and Hospice Community Care for their care and companionship of Lou and his family during his illness.