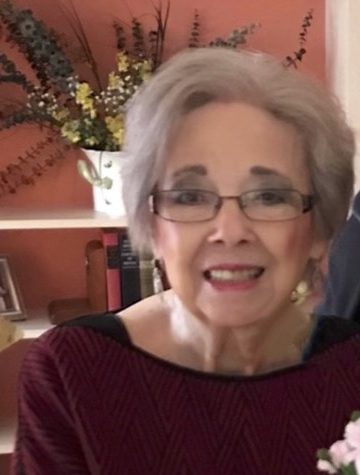 Lois Sweeney Fix, 97, passed away on Wednesday, 25 August 2021, at Patriots Colony Retirement Community in Williamsburg, VA.  Sweeney, as she was known to friends, grew up in Whitley County, Indiana, where she lived on a farm and attended Larwill High School.  She was active in sports and loved being a cheer leader as well as playing her favorite sport, basketball.  She was a Hoosier through and through.

In 1946, Sweeney graduated from Wesley Memorial Hospital School of Nursing affiliated with Northwestern University in Chicago. As a student nurse, she volunteered and served in the U.S Cadet Nurse Corps, and cared for wounded soldiers and sailors returning from the war.  In her off time, she learned how to play bridge and developed a life-long love of the game.  As a registered nurse, she served at Chicago’s Wesley Memorial Hospital near Lake Shore Drive. Sweeney served as the assistant to the surgeon and his team who performed the second open heart surgery in the country.

Sweeney met her husband-to-be, Joseph E. Fix III, an Army lieutenant home from the Pacific War, in the Windy City on Valentine’s Day in 1948 at the Knickerbocker Hotel.  They married three months later and started their married life in Rock Island, IL. Over the next 33 years, they moved their family of six over 30 times between Army bases in the United States and Germany.  Sweeney was very active in the Officers Wives Club at their different Army posts and served as a mentor to many younger Army wives.  From 1973-74, Sweeney served as president of the Army Materiel Command (AMC) Ladies Club in Alexandria. VA.

Upon Joe’s retirement from the Army in 1976, they moved to Old Town, Alexandria.  Sweeney enjoyed working at Wilfred-Rodgers Gift Shop on Market Square and traveling all around the world with her husband, Joe.  In 1986, they moved to Kingsmill, Williamsburg, where her passion to play bridge was rekindled and she played until the final months of her life.  For the past 23 years, Sweeney lived in independent living at Patriots Colony.

Her simple life on the farm near Larwill, Indiana, shaped how Sweeney lived her life and how she treated the people with whom she came in contact.  They always came first: her family, her friends, and people she met in everyday living.  The faith she nurtured living on a farm grew into the thoughtful caring for soldiers returning from the war, the loving caring for her six children, and passionate caring for her spouse of 48 years.  She lived her faith.

A private family burial will be held at Arlington National Cemetery in March 2022.