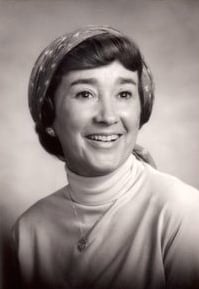 On Wednesday, August 26, 2020, the spirit and soul of Lois Saunier Hornsby passed on to the next

stage of her journey. After a long and lovely life of 92 years, her body had simply worn out, and she died peacefully in bed at her home in Williamsburg, Virginia. Lois would have probably wanted any report about her life to start with an expression of gratitude to her Heavenly Father for all of the gifts He gave her, especially for the gift of a capacity to love others.

Lois always “looked for the good in people.” She said she tried to follow Jesus’ example of passing over people’s faults and treating them with respect and care. She poured her soul into the causes of public education, racial reconciliation, and the arts, and spent much of her personal time in a ministry of healing prayer for those requesting it.

Lois was the younger of two children born to Doris and Pierre Paul Saunier, Sr.. She grew up in  Richmond, Virginia, in a neighborhood near the University of Richmond which, at the time, was approximately where the city ended and the rural countryside began. Having begun her education in the public schools, she graduated from Collegiate School, where a classmate recalls that by her senior year, she had developed such a friendly and encouraging relationship with the girls in the younger grades that many of them would wait at the school entrance every morning to give Lois flowers.

Lois had an innate optimism that was fueled by her many experiences. She was hired as a runway model for Miller and Rhoads and Montaldo’s. She was encouraged by her father, a concert organist, and her mother, a fan of choreographed dance, to develop her musical abilities. She later led a vocal trio that performed at various college campuses during her years at Mary Washington College, where she graduated in 1948.

Her college years coincided with the start of World War II. After the war she met and married Robert S. Hornsby of Yorktown, Virginia. They settled in Williamsburg where Robert was attending law school at The College of William and Mary.

Lois enjoyed a lifelong love of flowers and flower arranging. Before and during her years of raising a family, she lifted many spirits through her garden club exhibits and weekly decorating of her church, the First Church of Christ, Scientist. In her early years in Williamsburg, she worked  as a hostess and tour guide in Colonial Williamsburg and as a Red Cross Gray Lady at Eastern State Hospital.

Once her three sons reached school age, Lois worked vigorously to improve public education. She was a diligent activist, promoting equality, justice, and improved racial relations for all. She chaired numerous PTA councils and was directly involved in minority teacher recruitment for the Williamsburg-James City County Public Schools.  Lois was a founding member of All Together Williamsburg, a community organization bridging racial, ethnic, and cultural lines.

Her ongoing interest in world peace and cultural harmony energized her involvement in the international movement “Up With People”. She organized local youth into an interracial musical group called “Sing Out Williamsburg” that would fill the stages of school auditoriums to sing choreographed songs about patriotism, morality, and racial equality. She encouraged two of her sons, Bruce and Bobby, to add guitar, bass and vocals to these performances, and they credit the experience with furthering their musical development. Lois and husband Bob supported the aspirations of their boys, including youngest son Jonathan, by outfitting the family’s basement with amps and instruments for the soul music and rock bands they formed over the years.

Lois and Bob helped young people explore their potential in other ways. For twenty years, they counseled scores of students at William and Mary as advisers to the Christian Science college organization. They hosted many foreign students from the countries of Chile, Argentina, Sweden  and Japan. Their children cite this hospitality as one of the most enriching parts of their lives.

After Lois’s child-rearing years, she returned to an interest she had cultivated as an English major in college and became a driving force in launching Williamsburg’s Virginia Shakespeare Festival. In the last half of her life, she continued to build community through many organizations such as The Cultural Alliance of Hampton Roads, the NAACP of Williamsburg, the Williamsburg Clergy Fellowship, All Together, the Rita Welsh Adult Skills Program, the Community Action Agency, the Williamsburg Peace Initiative, the Democratic party, the Kiwanis Club, Habitat for Humanity, the Williamsburg Botanical Garden, and Historic Rivers Land Conservancy.

She appreciated the support of numerous community and civic organizations that honored her with awards. Among those were the Lafayette High School PTA, the Buffalo Boyz, the DAR, the NAACP, Church Women United, WHRO Public Broadcasting, and the Williamsburg Chamber of Commerce. Lois received the Prentis Award and the Sullivan Award at William and Mary. She was surprised and pleased when her name was chosen for the new Lois S. Hornsby Middle School in 2010.

Lois specifically requested that no memorial service be held.

Written remembrances of Lois may be sent to [email protected]

Charitable contributions in memory of Lois S. Hornsby may be made to WHRO Public Media at 5200 Hampton Boulevard, Norfolk, Virginia 23508 (whro.org); League of Women Voters of Virginia, 1011 E. Main Street, Suite 214A, Richmond, VA 23219 (lwv-va.org); or the charity of your choice.