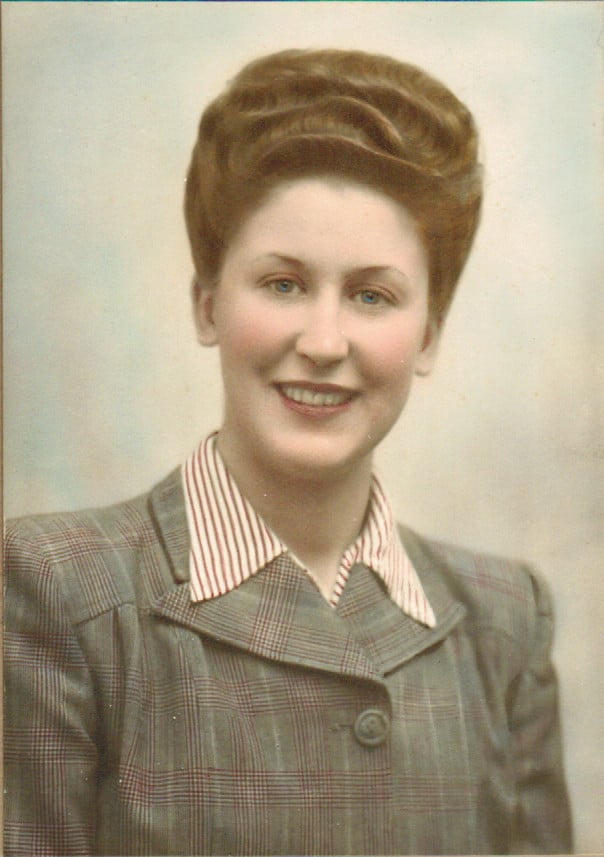 On August 18, 1923, Lilian was born to Robert and Mary Anne Bailey. She was the third of three daughters. Her sisters were Emily and Doris. The girls grew up in Edmonton, England.

When World War II began, the girls got jobs working in a Halifax bomber factory. Because the work proved hazardous to her health, Lilian became a WAF in the Royal Air Force, working at an airfield. It was at this time in her life that she would meet the man who would become her husband of nearly 70 years.

John Glaser had shipped out for England in September 1942 as a member of the 111th Field Artillery of the 29th Division. He was in England preparing for the Invasion of France. One evening in October 1942, John and his good friend, Jimmy Gaskins, went to a dance in the Village of Banbury Cross. It was there, as the story goes, that John saw Lilian and told his friend, ìIím going to meet that girlî. The rest, as they say, is history. They fell in love.

A number of letters went back and forth across the Atlantic to win the approval of at first, a skeptical mom. As I understand it a Catholic priestís letters helped a lot. Of course, John had to win over Lilianís family as well.

For a month prior to their marriage, John and Lilian were required to be present in church each Sunday. During the service the announcement of their upcoming marriage was read. It was at this time any reservations their union could be voiced.

On January 10, 1943, Lilian and John were married in Enfield, England; they honeymooned in London. To this day, John has a scrapbook containing tickets from places they went.

On June 6, 1944, John landed on Easy Green of Omaha Beach. John saw action in France, Holland and finally Germany. When the war ended, the 29th was part of the Army of Occupation. John applied for leave so he could get back to England to reunite with the bride he has last seen at the staging area prior to the invasion. It was now 1945.

Instead of getting leave, John found himself being shipped back to America with the first 5,000 men of the 29th Division. On September 16, 1945, John and Lilian were now an ocean apart. John contacted Lilian and her family as he began to make arrangements for her to come to America, Lilian had a huge decision to make. Was she to leave her family and all she knew to come to American to start a life with a man she hadnít seen since 1944?

Her fatherís advice was to give it a try. The family liked John. He seemed to be an honorable man and honestly wanted her to make a life with him. She was told that if for some reason she was unhappy, the family would find a way to bring her back home. After a thirteen day ocean voyage on a hospital ship, Lilian arrived in New York with many other war brides in February 1945. A new life began.

We had three homes growing up in the Yorktown-Williamsburg area. Our first home was the Cookís Terrace Apartments inside the Lackey Gate of the Naval Mine Depot. This facility is where my father grew-up, his parents lived until his father retired and where our dad worked from 1945 until he retired from government work in 1973.

The apartments have been gone for decades but this is where I was born in March 1947 and my sister in September of 1949. With no television back then, it was regular get-togethers with grandparents and great-grandparents that supplied entertainment.

In warm weather, we spent a lot of time on the Yorktown beaches. My sister was too young but I was always a problem, darting too far out into the water. My mother was always afraid that I might drown so on more than one occasion I found myself tethered to a stake driven into the sand so I could only get knee-deep in the water.

In 1953, we moved our first house. It was a three bedroom, one bath house with a kitchen, living room, dining room, and carport. When I pass it in my travels, I can close my eyes and remember the good times.

Our mother put her own special touch on that house. The house was always filled with the smells of home-cooked meals and baking. Our mother was involved in all facets of our lives, both school and social. She volunteered to help out on school outings and never missed an event.

She loved to sew and when our dad bought her a sewing machine, she made clothes as well as costumes for school plays and Halloween. I can remember many a day watching her cutting out and pinning McCallís patterns.

It was at this house that our mom learned to drive and began her working career. When my sister started school, Mom kept house during the day and had supper ready when our dad got home. After supper, he took her to her job as supervisor of the Williamsburg Inn kitchen. Later in the night she came home.

In the summers, we would go along with our dad to pick her up. We would hang out in her office in the kitchen while she finished up and we got to sample some of the pastries, which was a real treat. When she learned to drive, she took herself to work. I remember watching her master the mysteries of parallel parking on the street next to our house between two poles my dad put up to mark a parking space.

This time of year reminds me of how Christmas was at that house and through our lives. Mom decorated the house to the max, spray snow and decorations on the windows and storm door, and the smell of good food and hand-baked cookies of all descriptions. A spruce tree turned into a masterpiece. Mom made sure the tinsel was put on one strand at a time.

In the afternoon on Christmas Eve, our grandparents came up to spend the night. After a good meal, my sister and I were dropped off at the movies at which time the adults hid all the presents. After we went to sleep (not really), ìSantaî arrived and someone would slip into our rooms and place a stocking on our bedpost. My sister still says the stocking was always the best part. Christmas Day, four generations of the family brought food to my great-grandparents house in Yorktown, and we had a great get-together. Life was good.

In 1962, our parents moved to the house our father still resides in. This is the home that would see my sister and I through high school, collage, nursing school, the military, and into our adult lives. This house covers a span of fifty years.

In this time, our mother moved on to become a respected and sought-after salesperson at Binns Fashion Shop for many years. She ended her working career in her sixtyís managing the Williamsburg Needlecraft Shop for several years.

Our mother had a special talent for knitting and needlepoint, and every family memberís home is filled with her masterpieces. She could turn out sweaters, scarves and mittens in blinding speed. I also believe that every grandchild has at least one blanket made by her. Through all this, our mother kept an immaculate house, and she never missed one event in high school or college.

Mom watched every football game I played in and every track meet I competed in during grades 9 through 12. One note on football; in my first year of playing my mother learned that she should not come running out of the stands to administer first-aid on the bench if I was brought off the field bleeding. After that first mistake, she always sat stoically in the stands no matter how much damage I did to myself.

During our high school years, Williamsburg got its first bowling alley. Our mom became a pretty good bowler and joined a womenís league with some lifelong friends. Some Friday nights we would have family bowling night. You had to be on top of your game to keep up with her.

She became a professional football fan and it would last pretty much the rest of her life. Every Sunday there was football on the television. In the beginning she liked the Baltimore Colts. However, when my sister and her family lived in Denver for seventeen years, it was The Broncos and John Elway.

When the family watched television together, as we often did, there was usually a bowl of popcorn around. She loved popcorn. She also liked Almond Joys and Nutty Buddy ice cream.

Our parents sacrificed so that we could go to college. When we came home for weekends, our favorite foods were made. A care package of baked goods always went back with us. You never knew when one of those famous care packages would arrive in the mail. I used to look forward to those packages when I was in the army.

A story about the military might be of interest. I was in the Airborne. My parents came to see one parachute jump and after it was over, my mother swore should never watch another. She made good on that promise.

In a nutshell, our mother was a lady in every aspect of life. She was strong, constant and reserved. She was classy but no showy. She was slow to anger, never lost her temper or composure but was fiercely protective of her family. She was never loud nor did she ever utter a profane word.

She was honest. She said what she meant and meant what she said. She was kind, loving and would do anything in her power for you. She was very generous. She was everything a wife and mother should be. They broke the mold after her. She will be missed, leaving a void in many lives but will never be forgotten.

Kenneth, our motherís sister Emilyís son, has memories of his own he wants to share about his ìAunt Lilî. Prior to Lil marrying Jack, both her and Dol were fun-loving people and always up for a good laugh. I remember quite vividly my seventh birthday, and the last before World War II started, Lil and Dol coming round for my party, which Father always put on a large bonfire in the garden to celebrate. Lil and Dol were being chased into the outside toilet (no indoor ones then!) by my Father and having Jumping Cracker fireworks put under the door. When they came out, they chased my father round the garden in return.

I will never forget the generosity that both Lil and Jack gave when Lynn and I had our first children. We were quite poor then back in 1965 and somehow they found out (probably by my mom), and promptly sent over two large parcels containing childrenís clothing which were an immense help to us.

Both Lynn and I remember with great fondness the visits made by both Lil and Jack. We took them both to the zoo along with our two children back in the sixtyís. It was great fun and Lil made a fuss over the children.

It was always nice speaking with Lil on the phone as we did many times and she always finished the conversation with the same words, ìlove youî. What more can I say about a special aunt who was loved by us and will be sadly missed. Some people are irreplaceable, and she was such a one.