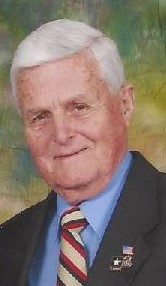 Williamsburg, VA- Leonard (Ike) Robert Iversen, Sr. (88) departed this life on July 2nd, 2018.
He was preceded in death by his beloved wife of 61 years, Pauline C. Iversen, his son, William L. Iversen, and daughter-in-law, Debby H. Iversen.
He is survived by son, Leonard Robert Iversen, Jr.; daughter, Annette Iversen Osterbind (Toney); daughter-in-law, Mary S. Iversen; grandson, Saul H. Iversen; granddaughters, Paula Kay Corralejo (John) and Allyson H. Iversen; great granddaughter, Savannah E. Corralejo and other extended family.
Ike was born in Chicago, IL as the youngest of four children and after living an adventurous childhood with his brother Jerry as his cohort, he enlisted in the Air Force at age seventeen. Fate stationed him at Fort John Custis in Cape Charles, VA where he met the love of his life on the beach. After serving four years, he left the Air Force and became a Virginia State Trooper and protected us for 31 years until his retirement in 1986. He also joined the Army Reserves as a Drill Sergeant and retired in 1990 with 20 years of service.
He fiercely loved his family, this Commonwealth of Virginia, and his country. He was lovingly known as the Public Relations State Trooper because above all else he loved helping people. Many was the time a stranded motorist received his help and assistance, even bringing tourists from out of town to his house to spend the night. If anyone had a project or needed to build or fix something he was always there to help. He just loved being with people and offering his assistance.
He truly never met a stranger and has had a multitude of friendships built over the years. Many of these friends have supported him in his last days and our family will always treasure the love and support we have experienced.
There were no more loving and supportive parents and grandparents than Ike and Pauline. We will cherish their memory always.
A memorial service will be held at Bucktrout of Williamsburg Funeral Home on Sunday, July 8th, 2018 at 11:00am. In lieu of flowers please make donations to Hospice House and Support Care of Williamsburg at 4445 Powhatan Parkway in Williamsburg, VA 23188. www.williamsburghospice.org. We will be forever grateful for the serenity, tender care and peaceful environment they provided.