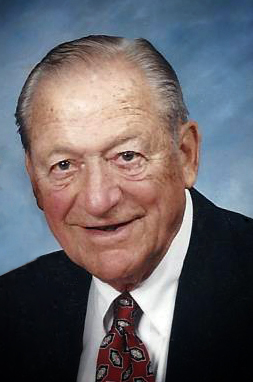 Kenneth Everett Boehm, 93, passed away peacefully on October 9, 2014. He is survived by his devoted wife of 71 years, Annabelle Cora Snyder Boehm, two daughters and their husbands, Bonnie-Leigh (Bill) Jones of Richmond, Virginia and Christine Cora (Michael) Thomason of Darlington, SC, four grandchildren, who fondly called him ëGrummyí, and seven great-grandchildren. Born March 6, 1921 on Long Island, New York, he was the son of the late Alfrieda and Frederick Boehm and brother of the late Muriel Boehm Ennis. His childhood years were spent on Long Island and in New Jersey. In 1943, he graduated from Duke University, where he played soccer and basketball and was a member of Sigma Chi fraternity. Immediately upon graduation in May, he received orders to report to Notre Dame Midshipmenís School, from which he graduated in September 1943. The next day he married Annabelle Snyder in Slatington, Pennsylvania and then reported for duty to the United States Navy Small Boats Unit in Norfolk, Virginia. He was sent overseas for more training to participate in both the European Theater of Operations, including the D-Day invasion of Normandy in June 1944, as well as the Pacific Theater, including Okinawa and the Philippine Liberation in 1945. In 1946 he accepted a job as a student engineer with Bell Telephone Company of Pennsylvania in Allentown and began what would be his life-long corporate career. He held management positions throughout the company from district and division levels to Vice President. He was chosen one of Pittsburghís Outstanding Young Leaders early in his career and later selected to spend a year at the Institute of Humanistic Studies for Executives at the University of Pennsylvania. Ken was involved in numerous civic organizations during his career and as part of his corporate moves, he and his family enjoyed homes in the Allentown, Harrisburg, Pittsburgh and Philadelphia areas through the years. In 1984, with the divestiture of the Bell System, he retired as Vice President for Verizon. A highly competitive athlete, Ken was an avid golfer throughout his life and enjoyed racquet sports from tennis to squash as well, keeping the trophy cabinet filled. He and his wife spent winters at their home in the Florida Keys for many years and moved to the Williamsburg Landing community in Virginia twenty years ago. He will be remembered for his exemplary leadership style, his generosity, his quick mind and wit, many friendships, and most importantly, his deep commitment to and love for his family.