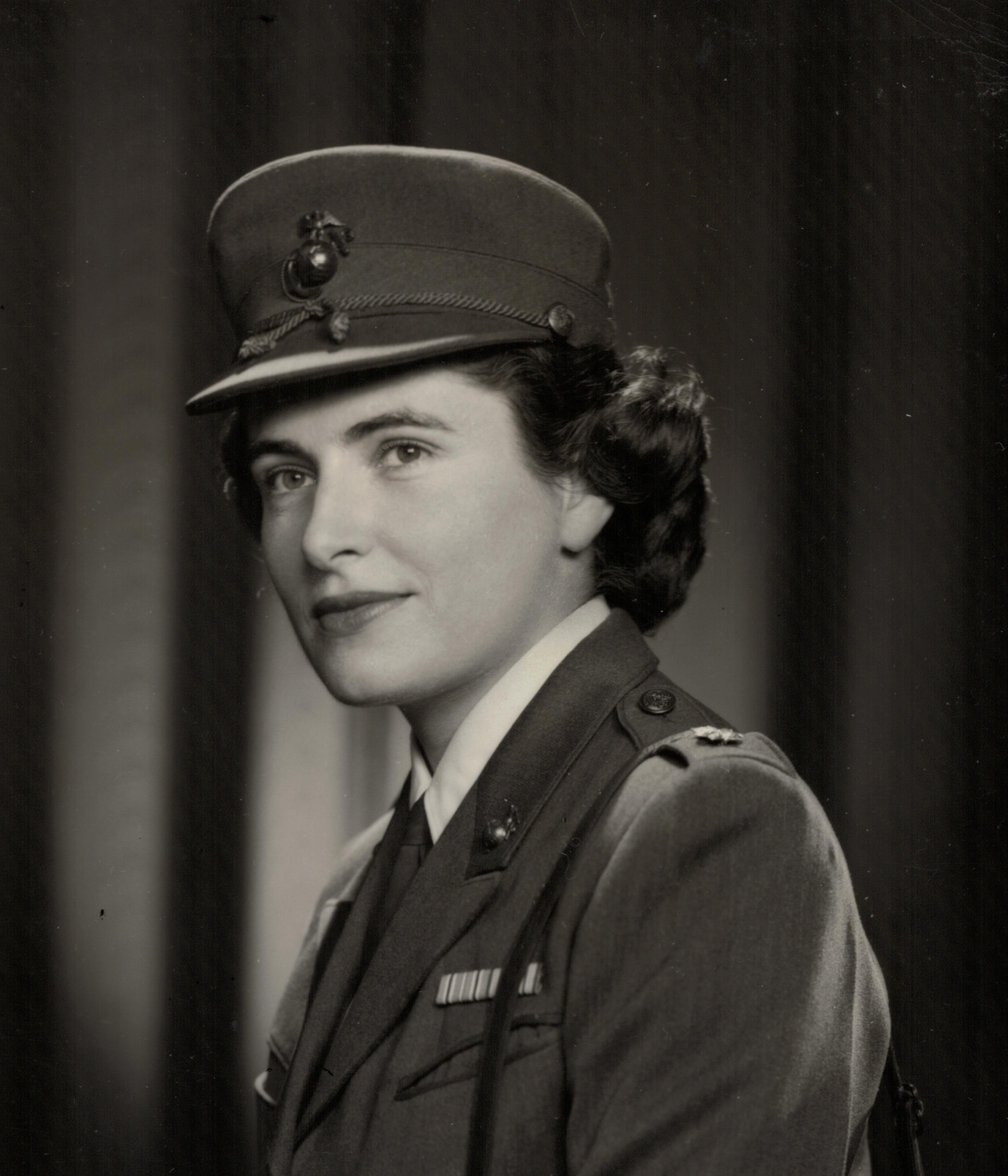 Julia Estelle Hamblet, 100, died on April 17, 2017 in Williamsburg, Virginia.
Miss Hamblet was born in Winchester, Massachusetts May 12, 1916, the daughter of Abel Martin and Marcia Coburn Hamblet. She attended the Hartridge School in Plainfield, New Jersey, graduated from Vassar College in 1937 and received a Masters from Ohio State University in 1950.
Following six years in the U.S. Information Service, Hamblet was the first Marine Corps Women’s Reserve Officer Candidate to be sworn in. Commissioned a First Lieutenant upon completing training, she served first at Camp Lejeune, North Carolina. Promoted to Captain, then Major, she served as Commanding Officer of the Women’s Reserve Battalion at Quantico, Virginia. At Cherry Point, North Carolina she commanded the Aviation Women’s Reserve Group, the largest Woman Marine Command in World War II with 2500 enlisted women and 125 officers. Discharged at the end of the war, she was called back in 1946 as Director of the Marine Corps Women’s Reserve. She was the youngest director of any of the American women’s services.
In 1948 she accepted a regular commission as major, one of the first three women officers commissioned as regular officers in the USMC. Promoted to Lieutenant Colonel she planned and established the first Women’s Organized Reserve Units in the country. Other assignments included Assistant Personnel Officer, Fleet Marine Force, Pacific in Pearl Harbor and Commanding Officer of Women’s Officer training at Quantico. In 1953 she was promoted to Colonel and was appointed Director of Women Marines, a position she held for six years. She subsequently became Military Secretary to the Commander-in-Chief, Allied Forces, Southern Europe, and retired in 1965 following Command of Women’s Recruit Training at Parris Island. She was awarded the Legion of Merit.
Working for the U.S. Office of Education from 1965 to 1978, Hamblet worked in elementary and secondary education programs, the Right to Read Program and managed the Guaranteed Student Loan Program in four northwestern states.
Miss Hamblet moved to Alexandria, Virginia where her volunteer work after retirement included board member of the Alexandria Red Cross and the Alexandria Y.W.C.A. She was a Ruling Elder in the Old Presbyterian Meeting House in Alexandria. In 1986 she moved to Williamsburg, Virginia. She was a member of the College of Elders at the Williamsburg Presbyterian Church, was a volunteer for ten years at the Williamsburg Regional Library and served for six years on the Residents Board at Williamsburg Landing where she lived. She was preceded in death by brothers Phillip and Newman. She is survived by 5 nieces: Bobbie Hamblet Wilkinson (Tom), Carol Hamblet Adams, Janice, Doreen, and Shirley Hamblet; one nephew, Kenny Hamblet; 4 great nieces; 3 great nephews; 3 great great nieces, and 7 great great nephews. Private services will be held in Massachusetts at a later date.
In lieu of flowers, contributions may be made to Women Marines Association (https://donation.womenmarines.org); the American Cancer Society, or the Williamsburg Landing Memorial Fund. Online condolences may be shared at bucktroutfuneralhome.net.