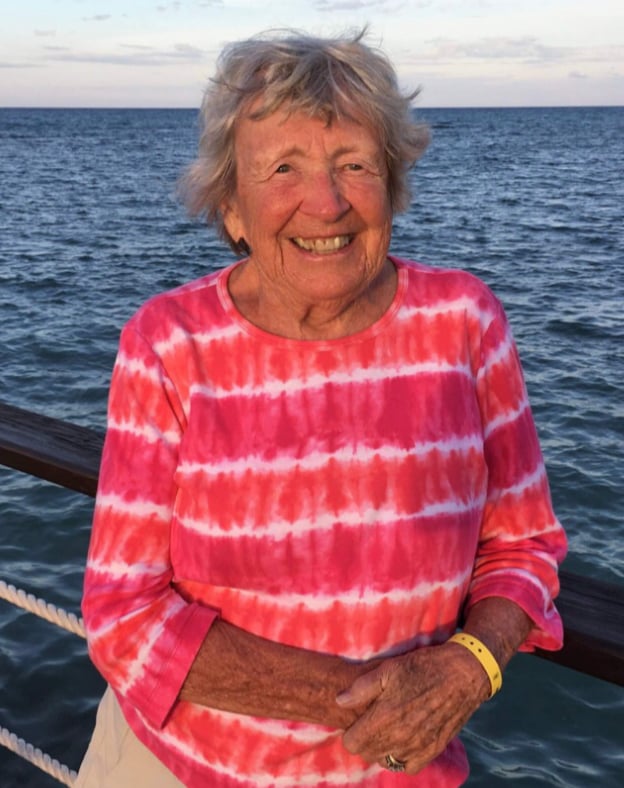 Our beloved mother, Judith Hudders Lovegren, died September 18, 2021 in her home in Williamsburg, VA.  She was born in Utica, NY on June 18, 1930 to Jessie Dondleyand James Henry Hudders.  She was preceded in death by her parents, our father Robert Richard Lovegren and her brother James Bowman Hudders.

We want to share a little about our Mom so you can know our joy in being raised by this wonderful and incredible lady. She graduated from Middlebury College and after biking through Europe with friends, started working for the New York Telephone Company. She then moved to Cambridge, MA where she worked with the Publications Office at Harvard University Press, becoming a life-long Red Sox fan and later adding the Nats.

After she and Dad were married in 1954, they moved to Washington, DC. As the matriarch of a National Park Service family, Mom moved us to Yellowstone National Park in 1966 where Dad served as Assistant Superintendent. We then relocated to Grand Canyon National Park in 1969 where Dad served as Superintendent. In 1972, the family moved to Scottsdale where Dad servedas Arizona State Director. Throughout, Mom, who was a phenomenal chef, entertained dignitaries and government officials including a lunch for Lady Bird Johnson. She took full advantage of the West including adventures in Canada, Mexico, and all the states in between, such as skiing inYellowstone, camping at Zion, and hiking the Grand Canyon rim-to-rim-to-rim at the age of 38 (and reprising this 36 years later at a family reunion where she hiked to Phantom Ranch at the bottom of the Canyon and back out the next day at the tender age of 74). While in Arizona,Mom fully immersed the family in the cultures of the Southwest. She also made sure we traveled and experienced it thoroughly and thoughtfully.

In 1974, our family moved back to Washington, DC. Mom worked for the Fairfax County School System at the Area 1 Office and later as an aide in a classroom for students with learning disabilities. Education was always important to her, encouraging her children to earn five undergraduate and five masters degrees, a juris doctorate, and a doctorate. Three of her children had careers in education. Each year, Mom would plan a family trip to the beach, primarily at the Outer Banks.

Upon their retirement, she and Dad moved to Madison County, VA where they lived for 18 years. She loved living in the country. It was in Madison, where she became a master gardener and volunteered at James Madison’s Montpelier. She also hosted an annual gig for thegrandchildren when they were young and even had them help gather shitake mushrooms off the shroom farm logs. In 2004, they moved to Williamsburg to be close to family.

In all locales, Mom was active in the church, whether ecumenical or Episcopal.  A life-long and proud Episcopalian, she was the first woman elected Senior Warden at St. Luke’s Church in Alexandria, VA. Years later, she was elected to the Standing Committee of the Diocese of Virginia, serving Bishop Peter James Lee. She met and had an effect on so many people, especially from her numerous Church-related experiences including attending two Episcopal Church Women’s Triennial meetings, enjoying retreats at Shrinemont, and speaking at churches throughout the Diocese.

An avid reader and crossword puzzler, her other great joys included spending time with her extended family, being outdoors, traveling, going to the beach, and volunteering within her community, especially at the local library and Bruton Parish Shop.

Mom is survived by thirteen grandchildren, seven great-grandchildren, and her four daughters and son: Karen and Brant Smith of Charlottesville; Sally and Wesley Chappelof Elkton; Susan and Leonard Bosworth of Williamsburg; Joan and Brent O’Brien of Williamsburg; and James and Deidra Lovegren of Celebration, FL.

A true celebration for this remarkable woman will be held at Bruton Parish Church on November 21st at 1:30 pm with a reception to follow. Feel free to wear bright colors! If you would like to donate on her behalf, please do so to Bruton Parish Church (www.brutonparish.org) or a charity of your choice.