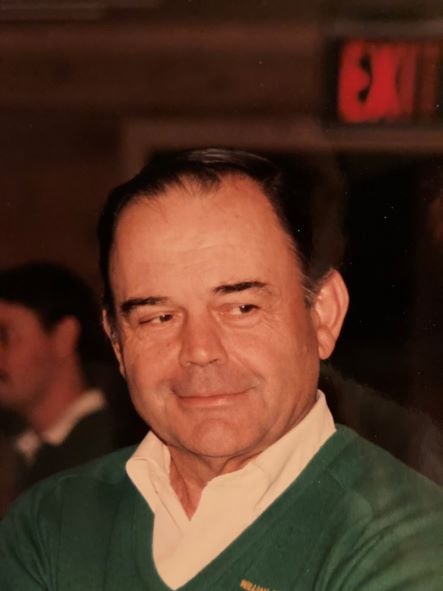 Joseph R. “Joe” Pinotti passed away on May 10th, 2021. He was the third child of Maria and Giuseppe Pinotti and was born in the living quarters behind the family’s Mother Lode bakery operations on Main Street in Sutter Creek, California on November 10, 1929. He attended local schools in Sutter Creek and then Stanford University where he met his future wife to be, Beverley, and where he received a B.A. Degree in General Education and an MBA in Business Administration. He was a member of Delta Tau Delta Fraternity, its President and its representative to the Fraternity’s National Convention.

Following Stanford, he accepted a position with Dow Chemical that was interrupted by the Korean War. He accepted a commission in the Medical Service Corps of the United States Army. Upon his medical discharge, he commenced his career with Dow Chemical Co and was assigned to chemical sales in Los Angeles. He was subsequently selected to be a part of the cadre team and for the next 9 and 1/2 years, initiated and built Dow’s business in Europe. He served in management slots in Zurich, Switzerland, Milan, Italy, and in Bilbao and Madrid, Spain. He returned to the United States in 1971 as Treasurer and Director of Administrative Services for Dow Badische, in Williamsburg, VA. There he recommended the acquisition of the Universal Textured Yarns Company headquartered in Mebane, North Carolina and became its President and CEO. He returned to Dow Badische in 1974 as Vice President of Administrative Services and upon BASF’s acquisition of the Dow interests in 1976, he was appointed Group Vice President, Chemicals, Badische Corporation. In 1984, he led the consolidation of his group’s activities with those of the BASF Corporation in Parsippany, N.J. Upon its completion, he took early retirement in 1987. He was later approached by Wacker Chemie, a German chemical firm headquartered in Munich, Germany, to head up its Holding Company for its North American activities and became its President until his retirement some six years later.

Joe was active in the Williamsburg Community; a member of Bruton Parish Church, the Williamsburg Rotary Club, the Williamsburg German Club, the World Affairs Council, the Colonial Italian American Organization, the Crown Colony Club, and served on the Board of Directors of Williamsburg Community Hospital. He chaired its Strategic Planning Committee and served as a member of its Finance Committee; he subsequently held the same positions on the Board of Directors at the Williamsburg Landing Retirement Community. He assisted the Dean of the School of Business at the College of William and Mary in establishing the Senior Executive Resource Corps, an organization of Senior Executives, later appropriately named Executive Partners, who serve as a resource support organization to faculty, administration, and students; in doing so, he served as a member of the Business School’s Advisory Board. For his service to the Business School, he was named an Honorary Alumnus of the College of William and Mary.

Joe achieved his greatest satisfactions in researching and publishing a history of his family, it is entitled “Two Families from the Lunigiana”. It traces his mother’s and his father’s origins and challenges back to the 15th century in Tuscany, Italy and details the challenges that they, their ancestors, and their siblings encountered as they sought an improved quality of life. Upon presentation of his opus to the Archives and to the Library in his parent’s home town, he was commended in a special ceremony and made an Honorary Citizen by the Sindaco of the Comune of Pontremoli, in Tuscany, Italy.

Contributions in lieu of flowers in his memory may be given to CURE for Childhood Cancer, 200 Ashford Center North, Ste 250, Atlanta, GA 30338, the Mason School of Business at the College of William and Mary, the Stanford University Athletic Department and or to your favorite charity.