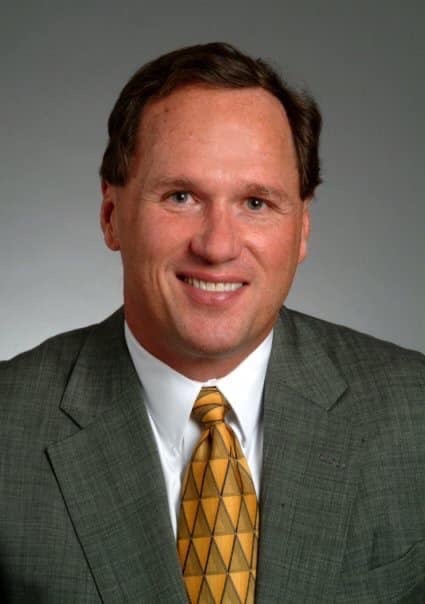 John passed away January 4, 2020 at his home in Williamsburg, VA following a courageous battle with ALS.  John was surrounded by his wife Sue, his children and their families over the Christmas holiday.  He was a wonderful husband, father, grandfather, accomplished business executive, telecommunications entrepreneur, naval aviator and friend to many.

A 1975 graduate of William & Mary, John was a three-year football letterman and 1974 Academic All-American.  John married his college sweetheart Sue Hanna following her graduation. Commissioned in the United States Navy in 1976, he earned his aviator wings and flew the EA-6B Prowler carrier-based electronic warfare jet on active duty for six years.

John was a successful business executive and entrepreneur.  He was an early adopter of telecommunication technology and internet services that led to a number of leadership roles in the industry.  John’s business career began with Baxter-Travenol where he gained a reputation as a leader in innovative uses of technology.  He was President of Pioneer TeleTechnologies/MCI Services and later networkMCI, a world class telemarketing, sales and service company.  He served as President & CEO of USA.NET; Managing Member of an initial stage investment fund for technology ventures; founded Intelliden in 2000 and served as Executive Chairman until 2010; President of Long Lines, a Midwest private telecommunication company sold in 2015.  Following his corporate career he became an investor in technology companies, start-ups and was a turn-around specialist for technology businesses. John served on many corporate boards including Brocade, Owens & Minor and Local Voice.

John was passionate about his Alma Mater and gave his time, talent and treasure to William & Mary. He served two terms on the Board of Visitors, he was Chair of the William & Mary Foundation, Chair of the Real Estate Foundation Board and a member of the Tribe Club Board. John received the Alumni Medallion in 2005, the highest alumni honor bestowed by the University. In 2019, he was awarded an honorary Doctor of Humane Letters degree. John’s favorite role at W&M was as a fan, proudly wearing green & gold to cheer on the Tribe at every opportunity.

John was an avid outdoorsman, golfer and was happiest when working at Pigs Point, his timber farm on the Chickahominy River in Charles City County.  Pigs Point was his playground where he created a place for family and friends to gather, share a glass of wine and relax.  He was most at home working the grounds, tending his garden and crabbing on the river.

John was a loving husband, proud father and playful grandfather.  He is survived by his wife of 43 years Sue Hanna Gerdelman, his son Mark Gerdelman (Rebecca) and their son Benjamin and his daughter Emily Ridjaneck (Matthew) and their sons Ryland and Cooper. He is survived by his sisters Donna Nawrocki (Franklin) and Janet Marchetta (Charles), nephews and a niece. He was preceded in death by his parents Ruth and Ward Gerdelman.