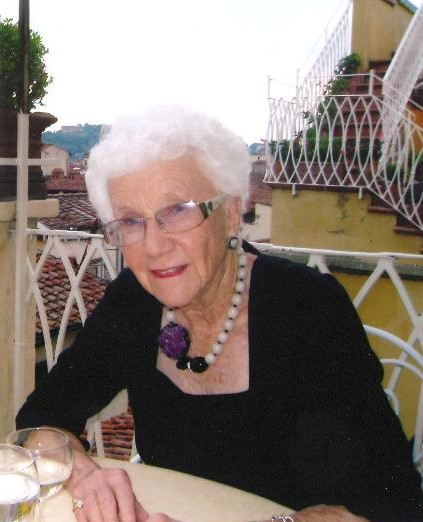 Peach Taylor, resident of Williamsburg Landing since 1995, died peacefully in her sleep at home on December 16, 2020. She was 100 years old. She was born in St. Louis, Missouri, attended John Burroughs School and graduated high school from Rosemary Hall in Greenwich, Connecticut in 1938.  She attended Miss Child’s School in Florence, Italy just before the beginning of World War II and returned to Florence annually for the rest of her life.  She lived in Washington, D.C. for fifty years before moving to Williamsburg, VA. She was a member of the Chevy Chase Club in Washington and a member of the Junior League Club of St. Louis and Washington as well as numerous other organizations and charities to which she devoted much of her time. She was a member of St. Martin’s Episcopal Church in Williamsburg.
She was preceded in death by her loving and steadfast husband of 55 years, Thomas Kauffman Taylor. She is survived by her three children, Thomas K. Taylor, Jr., Kathi Larson and Jennifer Taylor and their spouses Claudia Taylor and Gregory Larson.  She had four grand-children, eleven great-grand-children and many nieces and nephews.
Her favorite things were children and animals and her love of Italy and Eagle River, Wisconsin.  She loved knitting and sports.  She always kept in close touch with her friends and family.  She was someone they could always turn to in good times and in bad. She will be missed and long remembered.
A memorial service will be held at a later date in St. Louis, Missouri.  In lieu of flowers memorials may be made to The Salvation Army, ASPCA or to one’s own special charity.