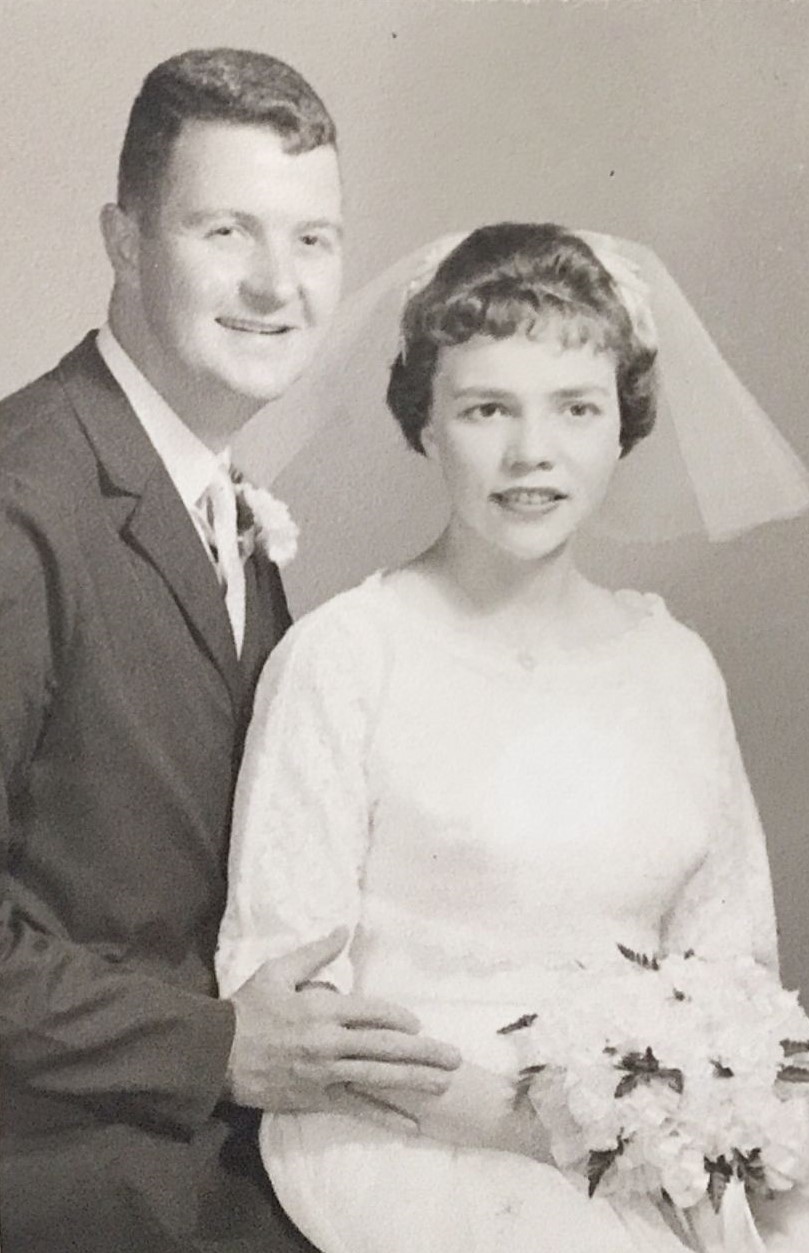 Jim made his grand entrance on June 15, 1938 to parents James and Helen, and older brother John, in Ypsilanti, Michigan. He made his exit quietly on January 17, 2021, in Williamsburg, Virginia.

Peg came on the scene January 26, 1941 and grew up in Ypsilanti, Michigan with her mother Margaret, brothers Dick and Mike, and sister Karen. She passed away on May 29, 2022 in Williamsburg, Virginia.

Jim & Peg were predeceased by their parents and siblings, and their first son-in-law Mark Tiller. They are survived by their daughter Lou and her husband Ben, son Ward and his wife Randi, and granddaughter Megan-Drew and her husband John. Their first great-grandchild is due this summer. They also leave behind cousins, nieces, nephews, and their families, and an extensive network of friends.

When Jim was in grade school he and a friend were messing around on the playground, which resulted in a broken arm for Jim. His mother, at a loss for how to entertain a child with a broken arm, sent him to the movies where he saw “Gone With The Wind” for the first time, laying the foundation for his obsession with architecture and old houses.

Their life together began by chance at the University of Michigan when a mutual friend realized that Peg needed a ride to campus, and Jim had a car. He proved to be quite the charmer – Peg said that if she hadn’t married him, her whole family would have disowned her. 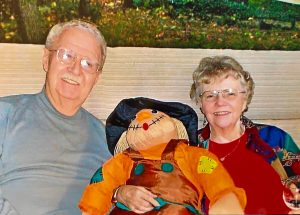 Jim studied architecture at U of M. That education, and the aforementioned obsession, led them to Virginia in the summer of 1963 where he began his career at the Colonial Williamsburg Foundation. He started as a clerk, retiring 45 years later as an Architectural Historian and Draftsman.

Peg began working for CW in 1964 in a two-year secretarial assignment. Instead of leaving when that project ended, she moved into the Architecture, Construction, and Maintenance department, focusing on property administration. She never looked outside CW for work, eventually retiring as their Director of Property Management after a rewarding 40 years with the foundation.

Jim taught four generations of his family how to drive a car. He couldn’t get within 10 miles of Washington DC without driving past the Lincoln Memorial. He could only skip on one foot. He thought Goofy was a cow.

Peg loved learning. She earned degrees from U of M, Thomas Nelson Community College, and Christopher Newport University. She spent several years involved with Toastmasters International and as an adult literacy tutor. She once bought a wok and then signed up for Chinese cooking classes. She taught her daughter and granddaughter that making jewelry was more fun than buying it.

Peg bought their first television, a small, portable black-and-white set, as a Christmas present for Jim, the first year they were married. She put it on layaway and paid in installments. She hid it in the only closet in their apartment for several days before Christmas, during which time Jim received a Christmas bonus… and wanted to use it to buy them a television set. Turns out Jim was pretty good at accidentally spoiling a surprise with his good intentions. What is it they say about great minds? 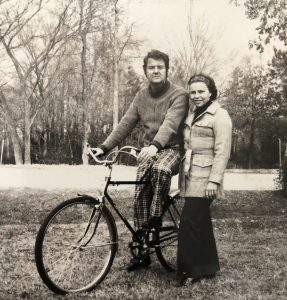 Jim & Peg loved to travel. They went on trips to the Great Wall of China, England, Greece, Egypt, the Caribbean, Mexico, all over the United States, and more. Peg said that they shared some wonderful times and visited countless fascinating places – all of them uphill. They ate at some pretty exciting restaurants: a Rijsttafel restaurant in Amsterdam, Rule’s in London, Commander’s Palace in New Orleans, Henry’s Hunan in San Francisco, the Rainbow Room in New York, on the waterfront in Key West, and a restaurant in Idaho that featured a salad bar with just lettuce, and musical entertainment by an old man in a loop-de-loop T-shirt who played the Star-Spangled Banner.

At Christmas and special occasions, Jim was often behind his camera, taking pictures, first with a Polaroid camera with film that had to be spread with a fixative when the colors had developed enough, and later with a better 35mm camera that went everywhere. On a trip to England, he stashed After Eight mints in the camera bag. The mints melted, and he toured the next house at the back of the group, surreptitiously licking the chocolate off the camera.

Peg planned all their parties. Whether they were cocktail parties, or slide show events, or surprise birthday parties, she was the driving force. Jim fell in with her plans, but she instigated most of them.

They both loved words and did crossword puzzles every day. Peg did cryptograms too, and usually won their Scrabble games. Every morning, she would print two copies of a crossword puzzle, they would complete the puzzles separately, and only confer on the rare occasion when something completely stumped them.

Jim met life with grace and wit, always ready to hear a joke or pun. He drafted houses, real or not, in beautiful pencil drawings. He read pretty much anything he could get his hands on – the bigger the book, the better. Jim loved watching historical dramas, especially on Masterpiece Theatre, and attending productions of Gilbert and Sullivan operettas. He would listen to anything by Stephen Sondheim.

Peg’s love of life matched Jim’s. She let him teach her how to drive after both children were born, and was still talking to him after the lessons. She was always ready to travel somewhere new, but she drew the line at eating a scorpion on the trip to China. She was always working with her hands, crafting objects of beauty and utility. Like her husband, Peg read constantly, and loved finding local performing arts offerings both typical and unusual. And when things did not go entirely according to plan, she became the problem solver to work around the issue and make a new plan.

Their television may have started out black and white, but they lived their lives in Technicolor. Please, no flowers. If you feel so inclined, we ask that you make a donation in their names to the medical or arts organization of your choice, or the Colonial Williamsburg Foundation, then order a milkshake, or mix a gin and tonic, or pop open a bottle of bubbly, and drink a toast to Jim & Peg. 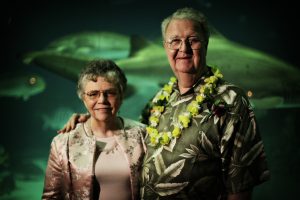