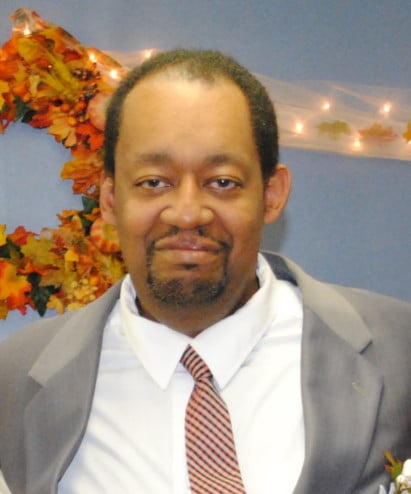 To know him, was to love him and even the simplest exchange of words meant you were no longer a stranger to Jacques. On Monday, October 9, 2017 Jacques Rojay Rhoden, friend to many, stranger to none passed away peacefully surrounded by his family at St. Mary’s Hospital in Richmond, Virginia. Born on November 17, 1968 in Anniston, Alabama, he was the son of the late James E. Rhoden and Sarah L. Rhoden-Sparks.

Rojay was educated in Alabama and received a drafting degree from Harry M. Ayers Technical College in 1991. He joined the military and served in the United States Navy where he received an honorable discharge. He was gainfully employed at Traditions in Colonial Williamsburg. Rojay faithfully served in his church, Liberty Worship Center as a part of the sound team. His faith to continue to preserve despite his pains and illnesses when it came to attending church challenged many to push past any limitations to pursue the heart of God.

Rojay loved video games and was a huge movie buff. He loved to write and draw. His devotion as a loving husband and father far exceeded any other thing he loved to do. He would always put others needs before his own.

Through all his tests and trials, he remained steadfast and never lost his faith in Jesus Christ, humility, strength, and most of all never once questioned God, “Why me?”

Rojay leaves to cherish many fond memories and laughs: his wife, Valerie Rhoden and daughter Jayla Herrington both of Williamsburg, VA; his sister, Krysti Rhoden of Williamsburg, VA; his brother, Juan-Carlos Rhoden of Boise, ID; his grandmother, Susan Horne of Bessemer, AL; his devoted brother-in-law, Erin Herrington; Special friends he considered as brothers and sisters and a host of nieces, nephews, other relatives and friends.

The family would like to take this opportunity to express sincere thanks for all comforting expressions of sympathy.

Special Thanks and Appreciation To:

Our church family, Liberty Worship Center for your continued prayers and support. May God Bless each of you for all that you sowed in prayer, encouragement, and love.