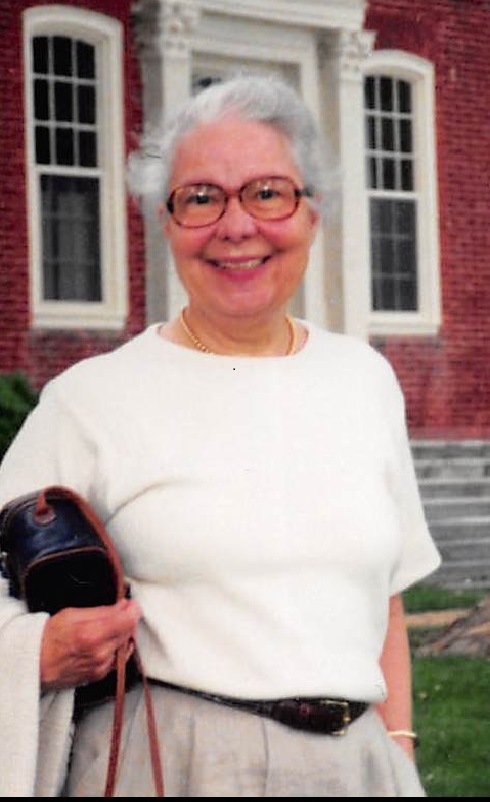 Hope Weaver Sardeson, of Williamsburg, Virginia, died peacefully in her sleep on February 5, 2016, in Williamsburg’s Hospice House at the age of 93. She was the widow of Charles Thomas Sardeson II – author, theologian, and teacher – who died in 1995. They were married in 1945, and had many years of study and travel together. The Sardesons moved to Williamsburg in 1989, in retirement, after a brief sojourn in Southern Pines, NC.

Mrs. Sardeson met her husband in 1942 at Washington and Lee University, where both were participating in the University’s first-ever Summer session which featured the first acceptance of women to the under-graduate school. At age 83, she wrote a delightful memoir, “A Beautiful, Beautiful Summer: W & L’s First Women Students 1942.” It was published in the Summer 2004, edition of the W & L Alumni Magazine. She received her B. A. in English from Flora MacDonald College and Music Conservatory (subsequently amalgamated into St. Andrews University), where she began a lifelong love of music.

In 1952-53 the Sardesons lived in Scotland, where Mr. Sardeson studied at Edinburgh University and Mrs. Sardeson wrote her weekly column, At Home Abroad, which was published in several Virginia and North Carolina newspapers. Following that experience came unexpected invitations to her husband to serve as Chaplain on two Norwegian American Line cruises: to the Mediterranean aboard MS Oslofjord in 1959, and “Around the World in Eighty Days” in MS Bergensfjord in 1961. She accompanied him on both.

Mrs. Sardeson was born September 17, 1922, in Savannah, Georgia, to William Nathaniel Weaver and Frances Louise Pegram, of York, South Carolina. She was very proud of her close family ties to the Hope, Stowe, Pegram, and Stith families of Virginia and the Carolinas. She was a direct descendant of Drury Stith, who was born in Charles City County, Virginia, in 1670 and died there in 1741, having represented the County in the House of Burgesses in 1703-1704. In light of her ancestry, Mrs. Sardeson became an active member of the National Society of Colonial Dames, State of Connecticut, and remained so to the end of her life.

After serving for twenty-three years as a Lutheran minister, Mr. Sardeson became the Executive Director of the Connecticut & Western Massachusetts region of the National Conference of Christians and Jews, and took up residence in Farmington, CT, where Mrs. Sardeson immersed herself in the antiques business and the study of local history. For many years she served as docent at the Hillstead Museum. She was active in the campaign to save the old, stone bridge over the Pequabuck River when it was slated to be replaced by the Corps of Engineers. In partnership with Miss Porter’s School, Mrs. Sardeson organized several annual series of Antiques Forums featuring expert guest speakers. One of these was the first-ever all-candlelight musical open house at the Webb-Deane-Stevens houses in Wethersfield. After moving to Williamsburg, Mrs. Sardeson continued to indulge her love of the arts, regularly auditing Art History courses at William & Mary.

The family will hold a private memorial. Notes of condolence may be sent to the family at PO Box 1306, Williamsburg, VA 23187. In lieu of flowers, those who wish to honor her memory are encouraged to donate in her name to: The World Monuments Fund, 350 Fifth Avenue Suite 2412, New York, NY 10118; The Department of Art and Art History, The College of William & Mary (checks should be made payable to the College of William & Mary Foundation with a memo for the Art History Department in honor of Hope Sardeson, and mailed to PO Box 1693, Williamsburg, VA 23187); or Hospice House of Williamsburg, 4445 Powhatan Pkwy, Williamsburg, Virginia.