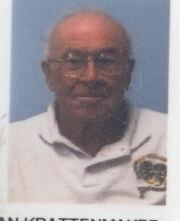 Herman C. Krattenmaker, 93, of Williamsburg, died May 4, 2012 . He was preceded in death by his wife, Betty Krattenmaker and his sister, Katherine Krattenmaker.

Herman was born in Camden, N.J., graduated from Swarthmore College in 1939 and served in the U.S. Marine Corps from 1943-46, including at Guam and Guadalcanal. He was an executive in the New York Yankeesí minor league baseball system for 12 years and retired in 1982 from the Westinghouse Electric Supply Company, where he held several positions in marketing management. He was an avid golfer and played in many tournaments in the Williamsburg area.

Herman is survived by three children: Tom, of Vienna, Virginia and his wife, Bevra; Betsy Marzoni of Littleton, Colorado and her husband, Terry; and Dave of Pittsburg. He also had three grandchildren and two great-children, who miss him dearly. No service is planned at this time.