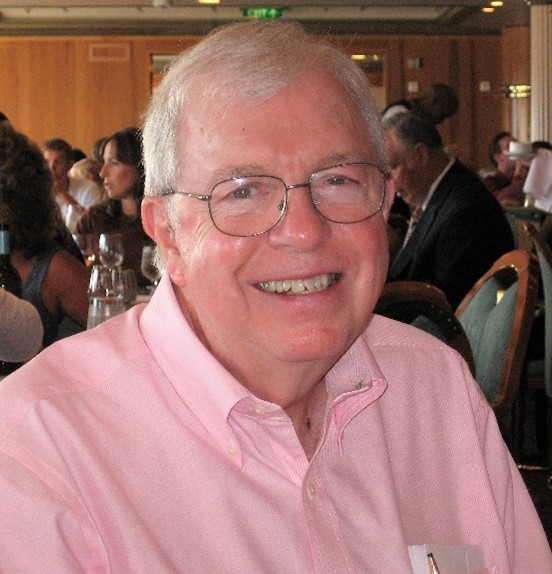 Harold Eugene “Hal” Pryor of Williamsburg, Virginia, passed away on Thursday, August 4, 2022. He was born August 30, 1926, in Newark, Ohio, to Clarence Iron Pryor and Mae Redman Pryor. His paternal grandmother, Maria Klaus “Mary” Pryor, was largely responsible for his upbringing.
He had an early brush with athletic success as a member of the Ohio State High School Basketball Champions of 1943. Upon graduation from Newark High School in 1944, he was accepted into the V-12 Navy College Training Program and began his enlistment at Purdue University. He was a member of Kappa Sigma fraternity and earned his Bachelor of Science degree in aeronautical engineering. He was commissioned an ensign in the US Navy and remained in the Navy Reserve until 1959. He took lifelong pride in being a World War II veteran and a member of “The Greatest Generation.”
But for all that, clearly his most significant accomplishment at Purdue was the wooing and winning of a particularly winsome and vivacious Delta Gamma coed, Florence “Terry” Mayes of South Bend, Indiana. They wed on February 2, 1947, and were completely devoted to each other for the next 72 years, until Terry’s death in October of 2019. He adored her and marveled at her effervescence and charm. He knew he was a lucky man.
Hal had a long, varied, and successful professional career. He started out in Seattle, Washington, with Boeing, but quickly moved on to aircraft heating equipment sales in Dayton, Ohio, before being promoted to a sales management position in Washington, D.C. From there he was recruited by a company in Los Angeles and moved the whole family (now consisting of Terry and three sons) to Palos Verdes, California, in 1960. Four years later, it was back to Washington, D.C., to work for NASA. In 1978, the United Nations offered him a position with the International Atomic Energy Agency in Vienna, Austria. He and Terry spent the next six years in Vienna and used the opportunity as a springboard for their international wanderlust. They visited dozens of countries together, throwing coins in the Trevi Fountain in Rome, skiing in the Alps, visiting St. Basil’s Cathedral in Moscow, and riding elephants in Sri Lanka. Hal and Terry returned to the states to finish his career as the Treasurer of LMI, a government consulting firm now in Tysons, Virginia.
But a summary of Hal’s life would not be complete without touching on the sweep of his interests and passions. First on the list was flying and love of aeronautics. He got his private flying license and his instrument certification. He also piloted single-seat gliders. He played golf, beach volleyball, tennis, and ping-pong. He shot pool and skeet. He skied on snow and water. He bowled and was president of his bowling league. He played poker for fun and bridge for blood. He was a weekend warrior. He was a particularly avid golfer and reveled in breaking 90. But even with all his own interests outside of the workplace, he always found time for his sons’ athletic endeavors. He coached his sons’ baseball and basketball teams. He went to wrestling matches and softball games. He was president of the PTA. In his retirement years, he was an eight-ball champion at Patriot’s Colony. He drank fully from the cup of life.
He lost his middle son, Jeffrey J., in 2015. He is survived by two sons and three daughters-in-law: Gregory J. and Ann Looper Pryor of Charleston, South Carolina; Eileen Mayer Pryor of Silver Spring, Maryland; and Bradley J. Pryor and Jodi Fisler of Williamsburg, Virginia.
In lieu of flowers, the family asks that you make a donation to your own favorite charity in Hal’s honor.