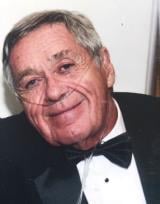 Born in Saginaw and raised in Alma, Michigan, the oldest of four children of Stanley Cheesman and Thelma Pratt Vliet, he was an honors student and played football, basketball and tennis in high school. He attended Alma College for one year before enrolling in The College of William & Mary, Williamsburg, Virginia, where he received his Bachelor of Arts degree in economics in 1954. At William and Mary, Gordon was President of Westminster Fellowship and The Society for Advancement of Management, Art Editor/cartoonist for The Flat Hat, Colonial Echo, The Royalist and Smoke Signals, played on the Tennis team, and was member of Phi Kappa Tau social fraternity.

After graduation he served with distinction in the U.S. Navy on the U.S.S. Worcester, a light cruiser, with tours in the Mediterranean, Caribbean and Japan. He was honored as Division Man of the Year for his leadership. Known for his humor he was a cartoonist for “The Navy Times” and the ship’s newsletter.

He was selected as a Rotary Foundation Fellow in 1957-1958 and completed his Master’s studies in Economics at the University of Exeter in Dover, England. He also represented Rotary International speaking at Rotary Clubs throughout Europe, Scandinavia and later the U.S. presenting programs for more than 300 clubs.

After his father’s death he returned home to Alma to be president of the Alma Varsity Shop, a sporting goods, office supply, and college bookstore, founded by Stanley Cheesman Vliet.

In 1966 his alma mater recruited him to be director of alumni affairs for William & Mary’s Society of the Alumni. In 1972 he was named executive vice president of the Society of the Alumni and until he left in 1982 was responsible for scores of innovations and ideas that included the acquisition and renovation of the first Alumni House for the College.

He not only created and designed much of the merchandise sold to alumni but was responsible for the design of the Bicentennial Medallion presented to visiting dignitaries, and the medallion for the Alumni Medallion award, the highest honor bestowed by the Alumni Association. He was Editor of the Alumni Gazette and took it from a quarterly magazine to an 8-issue per year newspaper with semi-annual glossy magazines.

Vliet developed the innovative and highly successful Alumni Educational Travel program that was known for its unique tours such as the first U.S. alumni travel program to the Soviet Union in 1974 and the People’s Republic of China and Eastern Europe “Iron Curtain” countries in 1979.

In 1985 he shifted his career focus to medical administration when his business, administrative, marketing, writing and people skills were needed for the development of Dr. Vliet’s first medical practice,

Health Strategies, Inc. in Norfolk, VA. The Vliet’s integrated model of care focused on mind-body health, preventive and climacteric medicine. As Dr. Vliet’s work grew to medical services, speaking, and writing consumer health books, Gordon provided executive leadership to help oversee the growth and expansion of their unique medical model to begin medical practices in Tucson, AZ in 1992 and Dallas, TX in 1995. The Vliets were residents of Santiago, Chile 2013-2016 researching and developing an innovative physician- directed medical tourism program until his health decline necessitated returning to Tucson. Their medical practice in Tucson and Dallas continues to serve men and women nationwide from puberty to late life seeking answers and help for complex endocrine disorders that have gone unrecognized in the fragmented, specialty-focused medical world.

According to Dr. Vliet, Gordon was much loved by patients for his compassion, sensitivity, problem- solving skills, and humor in the midst of their health challenges. His caring presence had an enormous impact far larger than his humble quiet demeanor conveyed.

On their 25th anniversary in Hawai’i he began scuba diving and became an avid diver. He logged more than 400 dives with his dive buddy wife at sites throughout the world. He was an accomplished artist and cartoonist, student of British Naval history, and a lifelong member of Rotary International, a Life Member of the National Rifle Association, and Life Member of the Arizona Citizens Defense League.

Gordon best exemplified his whimsical, romantic side in his passion for finding one-of-a-kind champagne flutes, many created by artisans here and abroad, to give his wife for special occasions. His 45- year collection fills one wall of the couple’s Arizona home and remains a focal point for conversation and stories. A friend commented, “Gordon organized the display for artistic impact, and could tell if even one of the hundreds of flutes were out of place.”

Gordon Vliet wanted to be remembered as “A reader of books, a student of history and art, a lover of nautical lore, a very lucky fellow who married so well, had many good friends and experiences, who saved the William & Mary Society of the Alumni and the Queen’s Guard, who believed in and supported as best he could his wife’s work, and he had a very full life.” At the end of his life he said his only regret was that he had not devoted more time to his painting.

A Celebration of Love for family and friends was held on February 14, 2019 in a sunset ceremony. Interment is at the Arizona Veterans Memorial Cemetery, Marana, Arizona following a rendering of military honors on February 15. In October 2019, a Celebration of Life will be held at the Wren Chapel on the campus of the College of William & Mary where the Vliets were married.

Due to seating limitations in the historic Wren Chapel, seating cards are required. If you would like to attend the Memorial Service, please email Dr. Lee Vliet with name and mailing address to request a seating card to be sent to you.