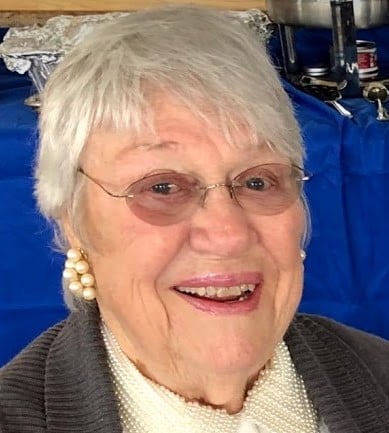 Genevieve Oliver Hughes 91; life long resident of Williamsburg entered into God’s home March 22, 2020. Gene was born in Richmond Va. to Albert and Elizabeth Oliver on November 22, 1928.. Gene was preceded in death by her husband Stuart Manning Hughes and their daughters Anne Virginia and Virginia Anne Hughes.
Her surviving family include her son Stuart Manning Hughes ll and wife Susan. Their family Stuart Manning Hughes lll and daughter Dee, and her husband and son Jessie and Waylon Cox , all from Williamsburg Va. Her daughter Susan and husband Leonard Lindstrom of Charleston S.C.. Their children and families ,son Robert Lindstrom ll, his wife and daughter Heather and Cabyll Lindstrom of Roanoke Va, daughter Anne Lindstrom Moore, her husband and sons ,Hunter, Hunter Manning , Henry Moore of Cumming Ga., and daughter Rebecca Lindstrom Steele, husband and son Evan and Hampton Steele of Waynesboro Va. Her brother Albert Oliver and wife Sharon of Laxena Va.and their family, sister-in-law Mabel Anne and husband Commander Robert Kramer of Williamsburg and their families and niece Lynn Sutton of Williamsburg Va.
Gene was known for her love for everyone she encountered, including her family, friends and their children, as well for her laughter and willingness to help anyone at anytime. She shaped and influenced many lives in Williamsburg throughout her life. She spread her love and knowledge through scouting, teaching, swimming, boating, fishing, sewing, sleigh riding and so much more.
Gene took great pleasure in raising her children through their school years and sports. She served both as a deacon and an elder for the Williamsburg Presbyterian Church, enjoyed the friendship of the Williamsburg lunch bunch and was a member of the DAR. She worked for the Henderson Construction Company and retired from Suntrust bank.
In lieu of flowers, memorials in memory of Gene can be made to the Ovarian Cancer Research Association, OCRA: [email protected]. The funeral will be private . A public memorial service will be held at a later date due to the current public health concerns