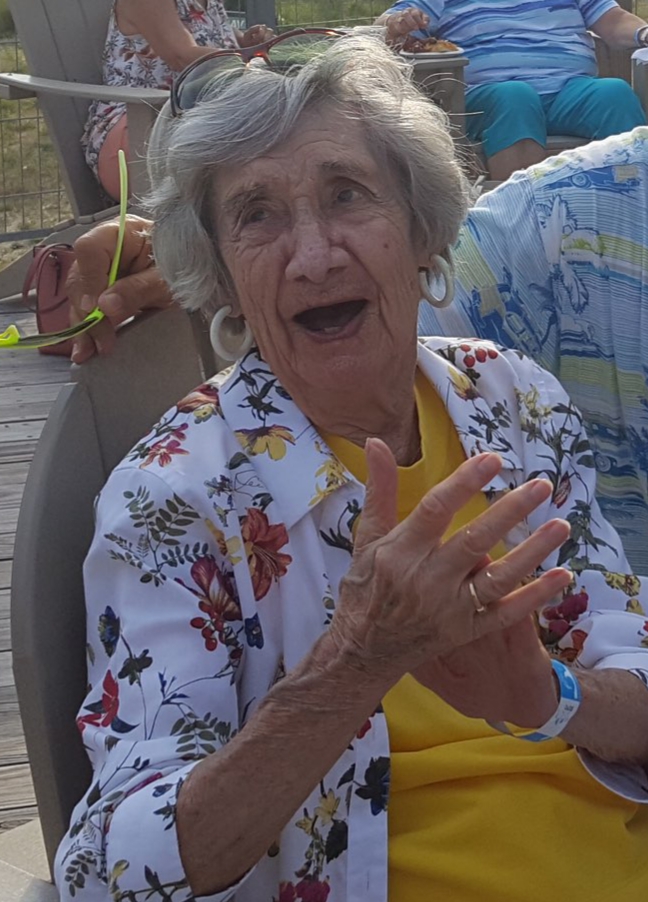 Was born April 1, 1923 in Pittsburgh Pennsylvania to Joseph Cornelius and Anna Margaret Meder. She was the second of four children all of whom reached adulthood. She was preceded in death by her sisters, Margaret A. Meder and Ann M. Thompson, and her brother, Joseph J. Meder. She is survived by three nephews and their wives who adored her, Eric (Janet), Peter (Tere) and Jeffrey (Paulina) Thompson and a niece and her husband Barbara (Billy) DeBerry. She was active and present in the lives of all her great nieces and nephews, James (Micah), Benjamin (Dana), Frederick, Julia, Anna Thompson and Heather (Josh) Clinton, Sarah (Jake) Roese, and Katie DeBerry. She was thrilled to enjoy her great great nieces Hailey and Riley Thompson.

Genevieve and her older sister were thrust into adult responsibility when their parent both died in 1940. The responsibility to raise her younger siblings sent her to work right out of high school. She began her working career in the mailroom of AT&T in 1941 and retired as a Vice-President of Finance in 1978. Along the way she finished a Bachelors degree and trained a number of men who became the CFOs of the fortune 100 company. She was truly ahead of her time and climbed as far up the corporate ladder as a women could climb 40 years ago.

She was a world traveler and pushed the envelope to travel to many “closed” countries-Russia in 1972, China in 1978 to name two. But her passports were stamped with 40 other countries. Her last trip was with her younger sister, Ann, to India when she was 88. On this trip they rode elephants and chased tigers.

Genevieve was remarkable. She was extremely well read and informed on issues far and wide. She read cover to cover the New York Times daily (in her mind the only remaining real newspaper)

She was a dedicated volunteer and served the College of William and Mary, Muscarelle Museum and FISH to name a few. She loved to meet people and regale them with stories of other people she had met.

She has lived in Williamsburg since 1981, but she also had lived in New York City, New Jersey, Vermont, California, South Carolina and Pennsylvania.

There are several distinct characteristics that bear mentioning; she was always straight-forward, you knew exactly where you stood with Genevieve, she was fiercely loyal to friends and family, she was passionate and opinionated, and if she was ready to end a conversation you would receive her famous send off line, “C’est la Vie”.

Family and Friends were very important to her. She was a “grand lady” and will be greatly missed. The mold was broken when she arrived and her departure leaves a gaping hole. Farewell dear lady, safe travels, we await the stories you will tell us when we join you on the other side.

Services will be held at the Campus Chapel of St. Bede’s Church located on Richmond Road in Williamsburg on Friday, February 15th at 11 o’clock. A reception will follow at Williamsburg Landings in the auditorium. Lunch will be served. In lieu of flowers please consider making a donation to the Genevieve K. Meder Memorial fund at the Williamsburg Community Foundation. Bucktrout Funeral Home is assisting with arrangments.