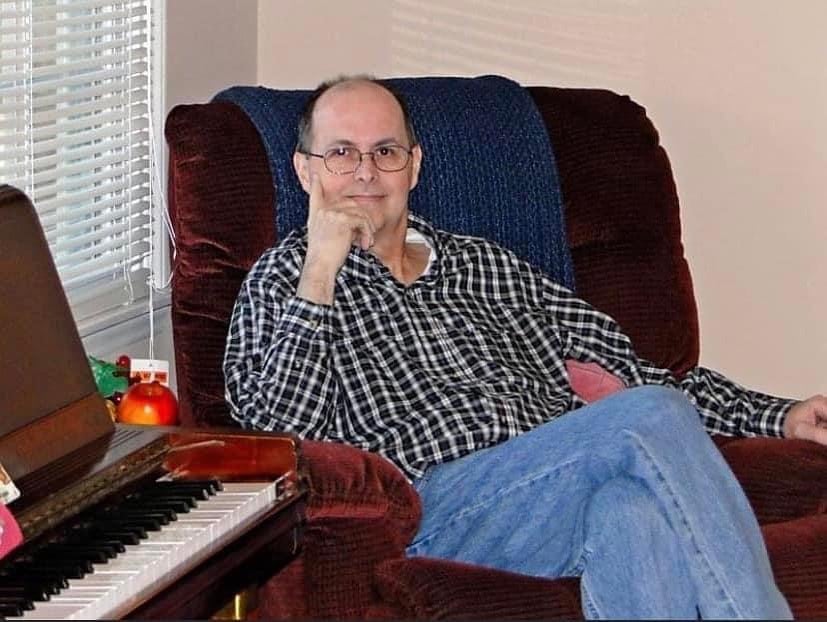 Gene always wrote in perfect ALL CAPS, yet rarely raised his voice. He was so genuinely nice you’d wonder if you were misjudging everybody else. He’d jokingly call himself a hillbilly, but he was not easy to define. In high school, his older sister’s family took him in when he needed direction. Soon he was hitchhiking to community college, and then becoming a machinist and engineering technician. That road took him to Connecticut for a spell, where he met the boss’s cousin, a woman who’d arrived from Hungary in search of something too. They married and had a son and came south back to where Gene had begun. In Virginia, they had a daughter, and he worked seven-day weeks while his wife baked fast-food biscuits to put herself through community college and help pave their road.

As a young man, Gene would go cycling, play basketball and golf. He displayed a bowling trophy awarded for rolling his league’s lowest score. He pushed his children to take school more seriously than he had. Sending them to college was among his proudest accomplishments. Gene worked hard, too hard, until pancreatic cancer came at age 54, 13 and a half years ago. The disease had taken his father shortly after Gene became a father himself, and Gene’s family was truly all that mattered to him. Contributing to the advancement of pancreatic cancer research became Gene’s work, and his primary oncologist credits him as the reason he now operates a successful pancreatic research program. He was singularly determined to do whatever possible to keep seeing us, and as a result all three of his grandchildren got to know him and feel the love of their Pa Gene.

Gene, 68, departed in his sleep at home a few days after sharing his favorite holiday, Thanksgiving, with his family, as well as with his pumpkin roll and deviled eggs. Even after 13 challenging extra years, the news still surprised us all. A memorial service will be held sometime next year. Memorial gifts may be directed to support the pancreatic cancer research of Dr. Lei Zheng at the Johns Hopkins Kimmel Cancer Center. Checks to Johns Hopkins University, indicating the gift’s designation in memory of Gene, can be sent to Kimmel Cancer Center Development Office, 750 E. Pratt Street, Suite 1700, Baltimore, MD 21202. Make gifts online at: https://secure.jhu.edu/form/kimmel.

Gene grew up in Peterstown, West Virginia, born to Joseph Herman Ogle Sr. and Bernice Thomas Ogle. He graduated from Narrows (Va.) High School in 1972. He lived nearly all his adult life in Roanoke, Virginia, until moving with his wife to Williamsburg in 2018. He worked at AMP, Damon Co., J&J and Accellent, among others.

Gene was preceded in death by his parents; sisters Gail Robinson, Pam Turner and Beverly Harvey; and brothers-in-law Ronald Worrell and Bob Lilly Sr. To Gene, there was no difference between in-laws and those born in. Gene’s memory lives on with his sisters Glenda Worrell and Carol Lilly; brothers Joey Ogle and Tommy Ogle; sister and brother-in-law Marguerite and Billy Good; brother-in-law Dick Robinson and sister-in-law Ro; brothers-in-law Roger Turner and Alvin Harvey; and dozens of nieces, nephews and cousins. Gene’s memory especially lives on with his wife Kathy Ogle; son Mike Ogle, daughter-in-law Katherine and granddaughter Lucy of Chapel Hill, North Carolina; and daughter Kristina Ader, granddaughter Morgan and grandson Connor of Chesapeake, Virginia. He leaves behind an example for them all.