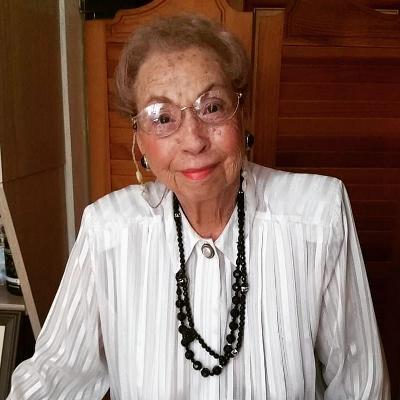 On January 25th, 2021 Frances Kathleen Stoneburner (Kathy) passed on at the age of 97.  Kathy was born Dec. 2, 1923, the only child of Robert C. Moore and Mabel Frances Moore in Colorado City, Texas.  Her family moved to Lamesa, Texas when Kathy was two years old. Kathy graduated from Lamesa High School.  Her father said there is no greater gift for a child than a good education.  Kathy graduated from Southwestern University with BS degrees in Chemistry and Biology.  While Kathy was there, the university celebrated its 100th anniversary as an institution of higher education.

Kathy started her first job (as a Laboratory Specialist) with the Pan American Oil Company on April 4th, 1944 at their Texas City facility.  While Kathy was there, she met the love of her life-Gene Stoneburner, and they were married on Dec. 28th, 1947.  Their three children were all born in Texas City, Texas.  Her favorite hobbies were gardening, solving puzzles, playing Bridge and traveling.

In 1957 Gene was transferred to Yorktown, VA where the American Oil Company was building a new refinery.  In 1958 they moved their family into a newly built house in the then young Queens Lake Community in Williamsburg, VA. Kathy was very supportive of all her children’s activities (often requiring significant amounts of cheering).

Kathy was selected as President of the Queens Lake Community Association in 1971. Due to her love of gardening, Kathy was a long-standing member of the Queens Lake Garden Club and created many flower arrangements for the Williamsburg Community Hospital’s Auxiliary Gift Shop. In 1981, Kathy & Gene introduced the family to their new lake house on Lake Gaston, which has served as a location for family gatherings ever since.

On January 27th, 2006 Kathy lost her best friend, travel partner and love of her life. They had been married for 58 years. Her daughter Pam became her new travel partner, taking Kathy first to London to see the International Flower Show.  Then Pam & Doug took her to Baja, Mexico where Kathy actually got to touch a whale.  They also took her on a photo safari of South Africa. While on safari, they watched 32 elephants march in front of their vehicle and while in Capetown, Kathy got to wade in the Indian Ocean. In 2013 Kathy treated the whole family to an Adriatic & Mediterranean cruise which everyone enjoyed immensely.  Kathy also got to share in numerous “vacations” with various family members in the Outer Banks.  Her Queens Lake home also continued to serve as a location for numerous family gatherings at Christmas, Thanksgiving and Mother’s Day. Having enjoyed a life relatively free of serious illness and blessed by such a loving family, Kathy truly believed that she had had a wonderful life. She was able to tell her family how lucky she was and for everyone to have a Happy New Year at a belated family Christmas gathering the day before she died.

A celebration of her life will be announced at a later date.  A graveside memorial service will be held at the Williamsburg Memorial Park on Saturday January 30th at 1:00 PM. In lieu of flowers, donations may be made in her memory to a charity of your choice.