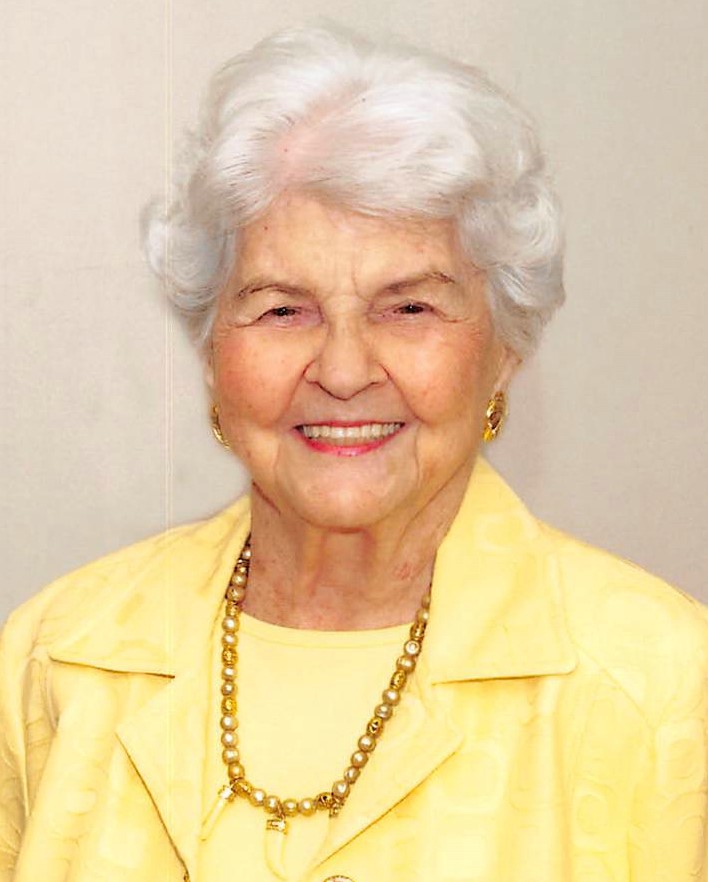 Florence Vera “Terry” Pryor of Williamsburg, Virginia, passed away on Monday, October 7, 2019.  She was born January 29, 1924, in South Bend, Indiana, to Mr. and Mrs. Forrest Mayes, where she lived until departing to attend Purdue University.  The popular coed joined Delta Gamma sorority and enjoyed a whirlwind social life until she met fellow Purdue student, Harold E. “Hal” Pryor, who captured her heart forever.

They wed on February 2, 1947, and were completely devoted to each other for the next 72 years. She dedicated the first two decades of their marriage to raising their three sons and supporting her husband’s increasingly successful management career, moving the family frequently without complaint.  In the late 1960s, she decided to pursue her own professional ambitions, becoming the Manager of Grove Printing in Rockville, Maryland, and then a Sales Manager for Kettler Brothers Inc. in burgeoning Montgomery Village, Maryland.  In 1978, she and Hal (who she always called “Buddy”), moved to Vienna, Austria, where he worked for the Atomic Energy Commission and they enjoyed an incredible five years of world travel.

In 1983, they returned to the U.S., settling in Bethesda, Maryland. Upon Buddy’s retirement, they chose to move to Charlottesville, Virginia, where they made fast friends with everyone they met, thanks to Terry’s sparkling personality. She created a philanthropic bridge club to benefit a variety of local charities. In 2008, they chose to relocate once more to Patriots Colony Military Retirement Community in Williamsburg, Virginia, where they enjoyed a very active social life.  Terry often said living at Patriots Colony was like going back to college, only with less homework and more money.

Terry’s sunny disposition, beautiful smile, and genuine interest in others endeared her quickly to everyone she met. A favorite family anecdote recalls when she and Buddy were checking out a potential retirement community and Terry went to the restroom.  A few moments later, she emerged arm-in-arm with a lady and one of her sons quipped, “Here comes Mom with her new best friend.”

She was a prolific letter, note, and card sender, maintaining a list of hundreds of friends’ birthdays, anniversaries, and other significant occasions. One of Terry’s few regrets in life was that as she grew older, the size of her mailing list decreased as others departed this life before her.

In addition to her husband’s, she brightened the lives of her sons and was the “mother-in-love” to her three daughters-in-law: Gregory J. and Ann Pryor of Charleston, South Carolina, Jeffrey J. and Eileen Pryor of Silver Spring, Maryland, and Clearwater, Florida, and Bradley J. Pryor and Jodi Fisler of Williamsburg, Virginia. Sadly, she and Buddy lost their son Jeff in 2015.

A memorial service will be held on Friday, October 18, 2019, at 2 pm, at Patriots Colony, 6000 Patriots Colony Drive, in Williamsburg, Virginia. In lieu of flowers, the family asks that donations be made to one of Terry’s favorite charities, Boys Town, online at boystown.org or by mail to 14100 Crawford Street, Boys Town, Nebraska, 68010.